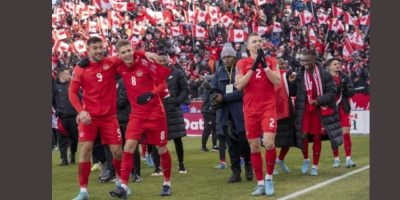 Canada will face Belgium, Morocco and Croatia in Group F in the opening group stage of the World Cup in Qatar this November.

The Canadian men are ranked 38th in the world compared to No. 2 for Belgium, No. 16 for Croatia and No, 24 Morocco.

Canada was the last ball taken in the draw.

The Canadians drew France, Hungary and the Soviet Union as first-round opponents in their only other visit to soccer’s showcase — Mexico ’86. Canada lost all three matches and was outscored 5-0.

Friday’s draw had Canada in Pot 4, which featured the lowest-ranked qualified teams. Rules of the draw meant that the Canadians could not be put in a group with fellow CONCACAF qualifiers Mexico and the U.S.

The draw took place at the Doha Exhibition and Convention Center with actor Idris Elba and broadcaster Reshmin Chowdhury as hosts.