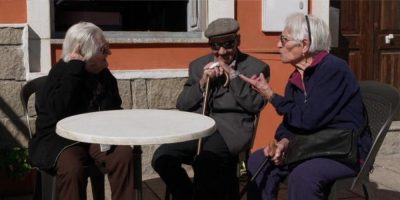 This scene of residents gathered at an Italian café may not seem remarkable, until you know their ages; they’re each 100 years old – and Guido Lepori says he’s got years to go: “At least 150!” he told correspondent Seth Doane.

Old age is common, and celebrated, in this town, where murals depict residents who’ve reached at least 100.

Villagrande is in Sardinia, a well-known destination for tourists who come for the culture and beaches. But it’s also drawing scientists and gerontologists, including Gianni Pes, and Valter Longo, who directs the Longevity Institute at the University of Southern California, and who collaborates with Pes in studying this phenomenon of so many centenarians.

“The whole world talks about this town,” Longo said. “To have six centenarians out of 2,000 or 3,000 people, extremely rare anywhere in the world.”

“We are trying to find an explanation,” said Pes, “because after 20 years of hard work, we still don’t have a clear explanation.”

Villagrande is a place where, after 63 years of marriage, one can still find Gabriele Mereu and his wife, Ermelinda, tending their garden.

Doane asked, “Are you always this active?”

So has his cousin Vittoria. At 93, she’s still hired by the Orlando Hotel to demonstrate the traditional way of making pistoccu bread.

Pes said, “Ten per cent of people who are born in Villagrande attain the age of 90. In Italy, it’s 3%. So, you can imagine it’s more than three times higher than the national average.”

Longo thinks periods of fasting, for instance during wartime, followed by a richer diet (with more protein and fat) in later years may contribute to longer lifespans. But meeting with those centenarians, he noted something else: the age of siblings.

Doane asked, “How much of this is genetics versus lifestyle?”

“If you think about an athlete that wins lots of gold medals, you probably have to have the genetics,” Longo replied. “But then you have to have the training, et cetera, et cetera. So, I think that the genetics set you up, but they’re not gonna get you there alone. So then, the lifestyle, and particularly the food, is a key factor.”

Those lifestyle factors are on display: living up in these mountains means regular exercise.

In town, community and family is important, particularly for Marietta Monni, who lives alone at 100. Doane joined her for lunch, made by family living in the apartment upstairs. On the menu: pasta with tomato sauce. Historically, vegetables have figured prominently here. So has red wine (imbibed in moderation).

Nearby, at Giulia Pisanu’s house, we asked this centenarian what she thought the secret to a long life might be. “Don’t be jealous,” she replied. “And don’t be envious.”

Advice that may not be scientific, but like those celebrated on the walls here, it comes from the perspective and wisdom of age.