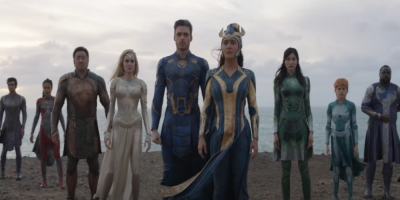 We’re finally back into the swing of things when it comes to hitting the theatre and that means the Marvel Cinematic Universe will continue to grow. The newest faces to join this ever-growing universe are the Eternals and Marvel has just released the final trailer.

The movie will follow, you guessed it, The Eternals, a race of powerful, immortal beings who have lived on earth for thousands of years and shaped its history and civilization. There are tons of familiar faces in this movie, including Salma Hayek, Angelina Jolie, Kumail Nanjiani, and it will also reunite two of the Stark brothers (from Game of Thrones), Kit Harington and Richard Madden. Another exciting note is that sitting in the director’s chair will be Chloe Zhao, who just picked up the Best Director and Best Picture wins at the 2021 Oscars.

Eternals is set to hit theatres on November 5th.