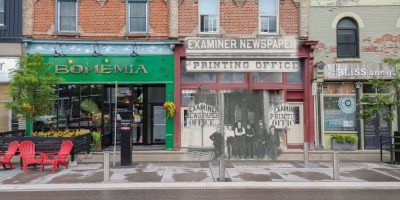 Nowadays, good luck getting your hands on a physical newspaper with most people’s news coming from social media, online sources, or emailed newsletters. However, back in Barrie’s early days, there were quite a few papers jockeying for people’s attention and The Barrie Examiner was one of the first.

Founded in 1864, The Barrie Examiner was created by publisher William Manley Nicholson, who hoped to take on the Northern Advance which already held a strong presence in the community of 3,500. The paper would change hands several times in the next few decades and by 1909, The Examiner would be competing with 3 rival papers.

In 1914, only two days before the outbreak of World War I, a fire caused extensive damage to the building and equipment used by The Examiner. However, rival newspaper Saturday Morning allowed The Examiner to use a basement office, composing room, and press equipment in its building to continue publishing. Six months later the two would join forces to publish The Barrie Examiner and Saturday Morning (which would eventually be shortened again to The Examiner), a partnership that would last for 25 years.

During World War II, and in the years after, The Examiner would purchase rival paper The Northern Advance and continue to grow with the once-weekly paper growing to publish twice a week by 1948 and three times a week by 1952.

The paper would change hands several times in the coming years, but that didn’t stop it from getting a reputation as one of Canada’s top newspapers becoming a six-time winner of the Mason Trophy, which recognizes Canada’s best all-around papers.

The paper was purchased in 2017 by Torstar which announced its closure shortly after the acquisition.

If you want to learn more about The Barrie Examiner and all of Barrie’s history, head over to the Barrie Historical Archives, Barrie’s online museum. It’s full of pictures, videos, audio, and documents spanning nearly 200 years and it’s completely free!