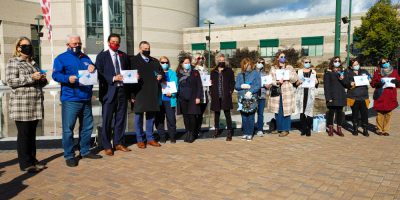 Local MPs John Brassard and Doug Shipley, along with representatives from the offices of MPPs Andrea Khanjin and Doug Downey, were also in attendance to speak and provide scrolls to the many local organizations that focus on combating Children’s grief.

Citizens of Barrie are encouraged to wear blue throughout the month of November to raise awareness and show their support for bereaved children and the grief agencies who serve those young people confronted by the reality of death.

Related Local News: Downtown Barrie BIA ‘in the pink’ as it unveils rebrand

For more information about Children’s Grief Awareness Day you can also visit the website, here.