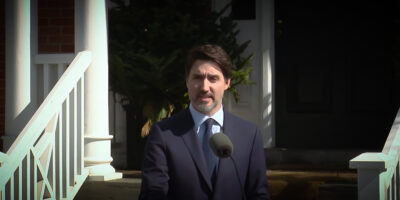 On Monday, China said Trudeau should “stop making irresponsible remarks” by linking the two cases together.

“It has been obvious from the beginning that this was a political decision made by the Chinese government, and we deplore it,” Trudeau said during his daily news briefing.

Kovrig and Spavor were detained after Meng’s December 2018 arrest in Vancouver.

Prosecutors in Beijing formally charged the two Canadians with spying on state secrets on Friday. Late last month a Canadian judge ruled the critical test in the extradition case of Wanzhou was met.

Meng is charged with bank and wire fraud in the U.S.

Both Meng and Huawei have denied the charges.

Trudeau called on Beijing to end its “arbitrary detention” and said Chinese authorities “directly linked” the cases of Kovrig and Spavor with that of Meng.

“There is no such thing as arbitrary detention,” said Zhao.

However, Chinese officials have linked both detentions themselves.

China’s ambassador to Canada, Cong Peiwu, linked the cases during an interview with Global last month.

Trudeau said the federal government will continue working “behind the scenes” to secure the release of the two Canadians.

He continued to rule out a prisoner exchange. “No. We’re not considering that.”