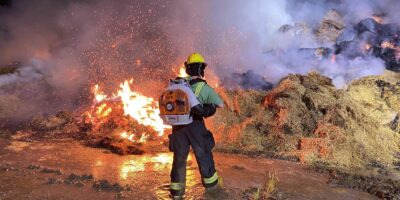 It was an early start for the crew over at Clearview Fire Wednesday after the call came in of a large bale of hay on fire just west of Stayner around 1:30 in the morning.

Fire Chief Roree Payment said on social media crews worked quickly to prevent an excavator that was on-site from being exposed to the flame. Once it had been moved firefighters started changing up their tactics. Payment said they stopped pouring water on the fire, and instead tried to cut the fire’s fuel off. Fans and blowers were set up to deprive the flames of oxygen.

Fire crews cleared the scene around 6:30 Wednesday morning and allowed what was left of the bale to peter out. Smoke would have been visible from the area of 27/28 Sideroad and Concession 6.