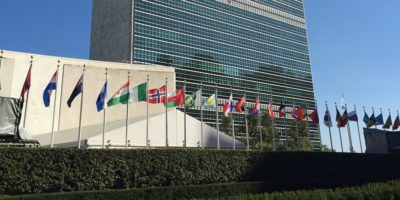 United Nations — The United Nations General Assembly kicks off Tuesday in New York with world leaders and diplomats from 193 nations coming together to try and address a range of pressing issues. Will President Trump meet Iran’s President Hassan Rouhani? Will India and Pakistan iron out their feud over Kashmir? Will protests demanding action on make any difference?

Below is a quick guide to what will be some of the most closely-watched interactions and topics at the gathering this year.

The Earth’s changing climate is the top ticket item at the General Assembly (UNGA) this year.

“There is good reason why most world leaders consistently identify it as the preeminent and central challenge for humanity in our time,” Karenna Gore, director of the Center for Earth Ethics at the Colombia University-affiliated Union Theological Seminary, told CBS News.

A recent CBS News Poll found that a majority of Americans say action needs to be taken right now to address climate change. Most consider it to be at least a “serious problem” — including more than a quarter who say it is a “crisis.”CBS joins dozens of news organizations in “Covering Climate Now” initiative

The U.N.’s Climate Action Summit begins on September 23, and is expected to be a forum to hold countries accountable to the international commitments they made to cut global warming as part of the 2016 Paris Agreement.

That summit will be preceded by the Youth Climate Summit — a gathering of young global climate campaigners who have organized worldwide demonstrations this year. They’re calling for another “global climate strike” this Friday, with 800 events planned in the U.S. alone and corresponding rallies around the world.

The “climate strike” initiative was sparked by teen activist Greta Thunberg, who first made news last year with her solitary strike against climate change in her native Sweden. Since then she has been joined by millions of supporters rallying in more than 150 countries. She told “CBS This Morning” last week that she hopes world leaders will “step out of their comfort zones to prevent the worst consequences from happening.”Students around the world march against inaction on climate change 39 photos

“Climate change threatens to undo the last 50 years of progress in development, global health, and poverty reduction,” U.N. Special Rapporteur Philip Alston told diplomats recently, warning that “it could push more than 120 million more people into poverty by 2030 and will have the most severe impact in poor countries, regions, and the places poor people live and work.”

Karenna Gore, the daughter of former Vice President Al Gore, told CBS News that although much is made of the Trump administration’s announced withdrawal from the Paris Climate Agreement, “technically the U.S. is still in the agreement.”

While the Trump administration can ignore it, according to the terms of the pact the United States cannot officially pull out of the accord until November 7, 2020 — the day after the next U.S. presidential election.

“So obviously the 2020 presidential election is incredibly important to the future of our global climate, and is an uncertain factor that is omnipresent in the background of this Summit,” she said.

U.N. Secretary General Antonio Guterres said “I think we have now the best available science saying that we should limit temperature growths during this century to 1.5 degrees Celsius and, to achieve that, we need to have carbon neutrality in 2050, and we need to have a very meaningful reduction of carbon emissions in 2030. “

“Climate change is running faster than we are, and we need to have a much more ambitious approach in what we do in order to defeat climate change,” he said.

President Trump is scheduled to address the U.N. General Assembly the morning of September 24. He will also attend a host of bilateral meetings with world leaders and other events. Among his side engagements in New York, Mr. Trump is set to host a campaign fundraising dinner — with a photo opportunity with the president — that is charging a whopping $250,000 per couple.

Secretary of State Mike Pompeo is expected to spend the week at the U.N., too, after returning from Saudi Arabia to discuss the recent attacks on one of the world’s largest crude oil processing facilities.

It will be Mr. Trump’s third speech at the UNGA; he attended in 2017 and again in 2018, when tensions with North Korea were the dominant news.

Iran’s President Hassan Rouhani is scheduled to attend — though as of Monday he still had not been granted a visa by the U.S.

Foreign Minister Javad Zarif was to meet members of the press on September 23, although several members of Congress have called for the U.S. to deny both men visas after the attack on the Saudi oil infrastructure, which senior Trump administration officials have blamed on Iran.

Before the attacks on Saudi Arabia over the weekend the U.S. had held open the possibility of a Trump-Rouhani meeting, but Iran has since ruled that out.

With tension between the nuclear-armed Asian neighbors as high as they have been in years over the disputed territory of Kashmir, eyes will be on India’s nationalist Prime Minister Narendra Modi.

“The trajectory of India’s ties with the U.S. has consistently been on the upward swing,” India’s U.N. Ambassador Syed Akbaruddin told CBS News.

Indeed, Mr. Trump was to join Modi at a summit, dubbed “Howdy, Modi!” in Texas, just before they show up in New York.

At the U.N., Modi will “articulate the views and hopes of more than a billion people” in his country, according to Akbaruddin. Dozens of people detained amid tensions in Kashmir

But his speech will be scrutinized after allegations of torture and other human rights abuses in Indian-controlled Kashmir.

Pakistan’s leader Imran Kahn will surely address the crisis in Kashmir when he speaks.

With feverish legal and political battles still raging in London over the United Kingdom’s , Prime Minister Boris Johnson’s plans to attend the annual gathering were up in the air, but his speech to the General Assembly was still scheduled for late on September 24, after Mr. Trump’s.

Brexit could make thousands of kids in U.K. undocumented immigrants

There have been unconfirmed reports that Johnson could use the occasion to unveil his much-touted but never explained proposal to replace the contentious “Irish backstop” portion of the withdrawal agreement that has mired the process thus far.

Russia currently holds the rotating presidency of the U.N. Security Council, and Foreign Minister Sergey Lavrov will chair two meetings, but President Vladmir Putin will not be attending as he has in the past. Russia’s U.N. Ambassador Vassily Nebenzia told reporters on Monday that the Russian delegation would present a proposal for a regional security plan to ease the U.S.-Iran standoff in the Persian Gulf.