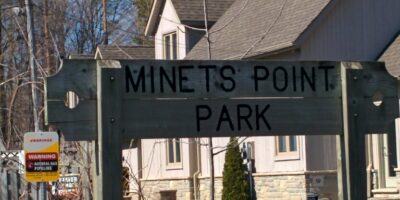 New parking fees went into effect today at Barrie’s beach-area parking lots in an effort to deter non-residents from flocking to the waterfront.

The new rates are $10 per hour to a maximum of $50 per day. (The Town of Innisfil recently boosted its waterfront parking rate to the same level).

Both municipalities have been struggling with how to limit numbers and ensure safety at the beaches.

The set fine for parking violations in Barrie is $30, but the city has applied to the province to increase that to $100.

“We’re hoping that by hitting people in the wallet it’s going to be more effective than just blanket signage and the risk of a lower-priced ticket,” says Barrie Mayor Jeff Lehman.

Barrie residents can still park for free with a Resident Parking Pass. Two passes were mailed to all Barrie addresses in 2017, with no expiry date. Additional passes can be purchased for $20.

Residents of municipalities adjacent to Barrie (Innisfil, Essa, Springwater, Oro Medonte) can purchase a waterfront seasonal pass for $90 (with proof of residency). All other non-residents will be charged $130.

Passes are available through ServiceBarrie@barrie.ca.

Closing beaches to non-residents “not feasible”

Some have suggested the city’s beaches be closed to non-residents, at least until we get through the COVID pandemic. Lehman says that’s not as easy as it sounds, “We have a waterfront that is all public space, from the foot of Mulcaster Street all the way around to Minet’s Point. You can access it anywhere along there so unless you’re going to build, literally, a four-kilometre wall and then check IDs it’s really not feasible to close off the central waterfront of Barrie.”

And while the smaller beaches could be closed to non-residents, Lehman says that would only create a bigger overcrowding problem at Centennial Park.

The Town of Innisfil last weekend turned away 1,200 non-resident vehicles trying to get into Innisfil Beach Park. Still, the park and the beach are accessible by foot for anyone wanting to seek parking elsewhere.

“It’s unfortunate that people are disuing our beaches.”

Barrie has also introduced a zero-tolerance policy for bylaw infractions at its beaches. “If you’re leaving your garbage, if you’re barbecuing illegally, if you are doing something unpleasant in the woods, there will not be a warning,” says Lehman.

As a reminder to all residents visiting the City’s public spaces this summer: