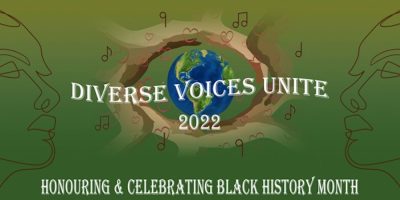 Diverse Voices Unite event producer, Manon Heran, says the initiative is a collaborative effort and without her students and community members, it wouldn’t happen.

The teacher at St. Peter’s Catholic Secondary School in Barrie has taken part and organized Black History Month events in the area for many years.

“I’ve been a teacher for 22 years, and for probably about 15 years I decided that I had the responsibility as an educator to celebrate Black History Month, but to also promote diversity and equity,” Heran told Barrie 360.

“I’ve learned a lot over the years that it isn’t something that should just be done in February. It’s something that needs to be celebrated 365 [days a year]…conversation should be happening all the time”

Harnessing technology to bring voices together

The event brings together prominent guest speakers, local dignitaries, performing artists, community partners, and social justice committee students from St. Peter’s, but the pandemic has forced Heran and her team to adjust.

“During the pandemic, we thought, ‘We’ve got to get the message out, we’ve got to celebrate, we’ve got to start having these courageous conversations,'” said Heran. “So, what better way to do it than virtual.”

The event uses a mix of pre-recorded and livestream elements, with Heran saying the video chat platform Zoom, and even something as simple as recording on cell phones, facilitated the initiative and made it interactive.

“I’m not a big technology guru,” said Heran. “But I have my students working on it, and so many angels out there that helped me put it together.

“And I just want to make it clear, I facilitate everybody coming together, but there are so many students, staff, and community members that helped me put it all together. Without them, it wouldn’t even be.”

Heran acknowledged that starting the conversation can be difficult at times because she is a white woman and may not understand everything, but says dialogue is needed.

“It’s meeting with them and starting those difficult conversations…so when everybody speaks…everything comes together. Without them, without the students of this community, this work wouldn’t happen.”

When asked what she thinks of her students and the time they’ve put into this project, one word was prominent – sacrifice.

“The amount of sacrifice that they’ve made,” said Heran. “Not going to their jobs to get this done, doing it during the school day, getting out of classes and giving up lessons, but still learning on another level, it makes me feel so proud and honoured.

“It doesn’t make this work difficult, it makes it flow. When all the pieces come together, you kind of feel like, ‘Wow, the light bulb is clicking for everybody’…there’s this level of synchronicity that [never] ceases to amaze me.”