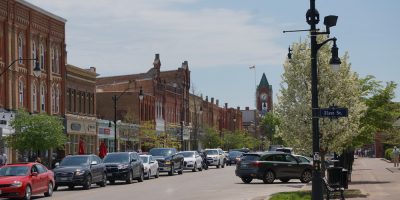 The Town of Collingwood is continuing a popular banner program first started to recognize the end of a world war.

To mark Remembrance Day, the town traditionally hung poppy banners on light standards in the downtown. In 2018, the town opted to feature images of local veterans to mark the 100th anniversary of the end of the First World War.

The switch proved popular among residents, and upwards of 60 banners were produced. The town wants more.

It is asking family, friends, and businesses to recognize a local veteran with a $100 donation to the Legion’s poppy fund.

“If you have a family member who you would like to see on a banner in the Downtown consider finding a good photograph of them during their time in service and join us in this unique project,” said Susan Nicholson, General Manager, Collingwood Downtown BIA. “100% of your donation will go straight to the Poppy Fund. We will be accepting applications for Veterans from all wars. Collingwood, let’s show our pride in family, military service and for some families, the ultimate sacrifice.”

The deadline to get involved is Friday, September 11. More information can be found on the Collingwood downtown website.