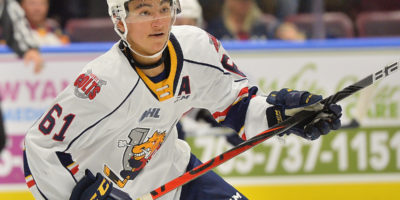 The Colts capped off what’s been a busy week of wheeling and dealing Friday morning by sending Carolina Hurricanes prospect and former first overall pick Ryan Suzuki to the Saginaw Spirit in a blockbuster trade before the noon deadline.

In return, the Colts received second-year forward Ethan Cardwell, defenceman Connor Punnett, a second-round pick in 2021, third-round picks in 2020 (Peterborough) and 2021 (Sault Ste. Marie) and a fifth-round pick in 2024 (Mississauga).

Barrie also gets an additional second-round selection in 2024 (Peterborough) and third-round pick in 2022 (Owen Sound) if Suzuki plays next season in Saginaw.

The Suzuki trade is one of seven moves made by Barrie at this year’s deadline.

“We’ve made some runs before and won some divisions, but we want to be in a position in a couple of years where we’re one of the top teams and we have assets to make ourselves better,” Colts general manager Jason Ford said.

While his club looked to the future in the majority of the deals, Ford still believes they’ll remain competitive this year.

“I think staying status quo wasn’t something we really wanted to do,” he said. “It was either make some moves to make some real noise and we didn’t feel we had enough tools in the arsenal really to compete with some of the other teams on our side.

“It’s not like we’re forgetting about this season at all, we still want to have a good competitive run and have a good post season. We’re just going to be doing it with a younger team.”

In Suzuki, the Spirit get one of the top players in the OHL. After missing six weeks with an eye injury, he’ll have the opportunity to team up with talented Saginaw sniper Cole Perfetti this season and likely the next.

“We felt that we had to pay that cost to get that type of player,” Drinkill said. “Suzuki’s got elite vision, elite skill. The way we play, a puck possession type of game, we just feel he’ll be a perfect fit with Cole Perfetti. I think they can gel together and be a dynamic duo in the OHL for a long time.”

While he understands it’s tough for fans to watch favourites like captain Jason Willms, Tyler Tucker, Matej Pekar and Suzuki traded away, Ford believes the pieces are there now to build a team that can not only contend for a division title, but take a legit run at an OHL championship in the next few seasons..

“It’s a bit of a tough pill to swallow because we’re trading some good older players, but when people start watching these young kids play and what we can do with the picks moving forward I think it will be well worth it,” he said.

The Colts continued to build on their young stable of talent with the addition of Cardwell and Punnett.

A second-round pick (33rd overall) in the 2018 OHL draft, Cardwell has 12 goals and nine assists for 21 points in 37 games this season after posting five goals in just 15 games as a rookie last year.

“He’s going to put up a lot of points and score a lot of goals in this league,” Saginaw general manager Dave Drinkill said of his former centre. “He’s a highly skilled kid who likes to make plays and he’s creative with the puck on his stick. When he gets the puck in the slot, he buries it.

“He’ll step into the Barrie lineup and play a top six role right away. You guys will be happy with him, with the way he plays and his skill and speed. As his confidence grows, his game will grow for sure.”

Cardwell, says Ford, is a complete package on and off the ice.

“He’s a high-end athlete and one of the better golfers in Ontario for his age group,” he said. ” He’s got good hand-eye coordination , he’s a skilled player with good speed and a high end character kid, which was really important in making these trades.

“It’s not really easy getting two good prospects in a deal.”

Punnett was Saginaw’s 19th overall selection in this year’s OHL draft. The six-foot-one, 185-pound Huntsville native plays a style of game that may remind Colts fans of a familiar face on the blue line a couple of seasons ago.

“He plays physical and hard, similar to a Justin Murray,” Ford said. “That would be a good comparison. He played on Team Ontario last year with Brandt Clarke. You got a right shot (Clarke) and left shot (Punnett), that would be a good pairing down the road. We’ll have to wait and see.”

“He’s got some offensive tools as well, but he honestly plays a little bit like Tucker did when he was young,” said Drinkill, who knew he would have to pay a price to land an elite forward like Suzuki. “He’s tough, he’s big and he’s strong. He’s very physical when he plays, but he’s got more puck skill and ability than people give him credit for. And he has a heck of a shot.

“As he gets older and more confident, he’ll be a great shut-down defenceman that can also contribute for them as well.”

In all, the Colts have netted eight second-round picks and eight third-round selections going forward.

“As far as I’ve been here, we’ve never had a bank of draft picks like that,” Ford said.

Add that to a strong offensive foundation up front in Tyson Foerster, Evan Vierling, acquired in a deal with Flint earlier this week, and Cardwell.

“Those are three premier junior forwards that we’re going to have moving forward for the next couple of years,” Ford said. “We got a pretty good base on paper going forward and that’s not including our regular OHL draft, other guys in the system and going into the European Draft again this summer.”

The Colts also pulled off another deal before the deadline Friday, trading veteran defenceman Jack York to Peterborough for third-round and fourth-round picks in 2023, along with an eight-round selection in 2020.