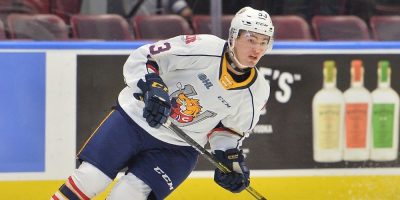 “Two out of three ain’t bad” for the Barrie Colts, but with all apologies to Meat Loaf, the way their three-in-three weekend ended wasn’t so great.

The Colts kicked off a busy weekend like a “Bat Out of Hell” with wins over Sudbury on Thursday and Mississauga on Friday, but with a chance to complete a sweep of three Central Division rivals against North Bay at home Saturday they hit a sour note.

Matvey Petrov recorded the hat trick and Dalyn Wakely added a pair of goals to power North Bay to an 8-3 win over Barrie at Sadlon Arena.

The loss came on the heels of a 7-3 trouncing of the Wolves and a late 3-2 come-from-behind overtime win in Mississauga.

The Colts (4-5-1) could have capped off a big weekend and moved into top spot in the Central standings, but instead, poor goaltending and a sluggish effort squashed any hope of that.

“If you had of told me that we’d get four out of six points on the weekend, I kind of would have went, ‘OK, I’ll hope for (that) and that’s just the of the way it was. It’s just disappointing to finish a weekend like that,” Colts head coach Marty Williamson said after Saturday’s loss.

“We played a pretty solid first game (Thursday), had a nice comeback win in overtime (Friday) and if we could have persevered and been a little mentally stronger, maybe we could have had a really big weekend for ourselves.”

Kyle Jackson, Michael Podolioukh, and Barrie native Mitchell Russell also scored for the Battalion (6-5) who only needed 19 shots to do the damage.

Colts starting goaltender Matteo Lalama was pulled 2:13 into the second period after giving up five goals on 10 shots and his replacement Matthew Sbrocca didn’t fare much better, giving up three goals on nine shots the rest of the way.

At one point, North Bay had seven goals on just 12 shots.

“Those games are hard to win,” Williamson said. “I think it was a combination. Yeah, we didn’t get the saves we needed, but we also gave up Grade ‘A’ opportunities and that. Just poor plays on us. The third goal they walked one of our defenceman and just ripped it up high.

“I thought we had pretty good jump until we took the penalty,” Williamson said. “We had five or six good shifts, and then we take a lazy penalty, and they get a lucky bounce off it. It hits the guy in the back of the leg, and it goes right to (Wakely) and he backhands it in.

“When you play three-in-three you need to get some stellar goaltending, and we really didn’t get that. There were other problems, and it was just a tough night.”

“They got a couple of lucky bounces there,” said Colts rookie forward Beau Jelsma, who found the scoresheet again after notching his first OHL goal in the win over Mississauga the night before. ” It’s a tough weekend going three-in-three, but I thought the boys battled hard. It’s a tough loss, but we’ll get them next time.”

Jelsma’s marker just 27 seconds into the second period cut the lead to 3-2 and coupled with a pair of big hits appeared to get Barrie on track, but as they would do each time the Colts found the back of the net, the Battalion would come right back.

A little more than a minute later, Russell and Podolioukh, on a penalty shot, scored 43 seconds apart, and it was basically lights out.

“We needed to be able to stop the bleeding there, and it might have gave us a chance to crawl back into it, and it just seemed like we couldn’t,” Williamson said. “We gave up a penalty shot and two-on-ones and stuff like that where we just keep shooting ourselves in the foot rather than give ourselves a chance.

“I still thought we were going to be in that game. It was a crazy game, but we didn’t have a lot of push late. We just seemed tired.”

The Colts now sit last overall in the OHL on the penalty kill at a dismal 67.6 per cent.

Barrie found itself down 2-0 almost midway through the third period to the Steelheads on Friday, before mounting the comeback.

Hunter Haight got the Colts on the board at 8:07 on the power play and then a little more than a minute they tied it on Jelsma’s first OHL goal. Clarke’s wrister from the point was the winner just 2:16 into overtime, with Barrie on the power play.

Jelsma would send the game into overtime when he circled in the slot and wired a shot past the glove of Mississauga goalie Joe Ranger.

“It was real nice to get the first one there. Get the monkey off the back,” Jelsma said. “(Nice) to get that one today too, but at the end of the day it’s about the team, and we lost the game today, so just keep working hard and keep going forward.”

Brandt Clarke, with his third in three games, and Anthony Tabak, with his first of the season, also scored for the Colts in the loss to North Bay.

Barrie kicks off the first of three road games on Friday night when they face former coach Todd Miller and the Oshawa Generals.

“We’ll get back to the drawing board, put this game behind us, and get ready for Oshawa on Friday,” Williamson said.

ICE CHIPS: Jacob Frasca didn’t dress Saturday after getting a hit, but Williamson said the veteran forward is expected back this week. As is Artur Cholach, who missed both weekend games after taking a hit to the head early in Thursday’s win over Sudbury. . . The Colts have trimmed their roster by sending free-agent signee and Florida native David Burri to Collingwood. Forward Trey Zagrzebski is also no longer with the team.