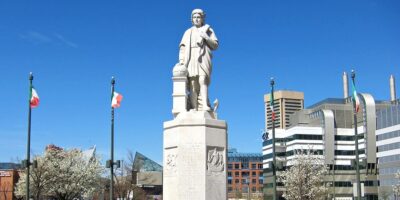 A statue of Christopher Columbus in Baltimore’s Little Italy was torn down amid protests Saturday night and then thrown into the Inner Harbor. Videos posted to social media showed the statue was pulled down using rope, and then dragged down a flight of stairs before being tossed into the harbour, CBS Baltimore reported.

Governor Larry Hogan on Sunday said tearing down the statue was the “antithesis of democracy and should be condemned by everyone, regardless of their politics.”

“While we welcome peaceful protests and constructive dialogue on whether and how to put certain monuments in context or move them to museums or storage through a legal process, lawlessness, vandalism, and destruction of public property are completely unacceptable,” Hogan said.

Police told CBS Baltimore late Saturday that they were aware of the incident, but roads in the area had been blocked off by protesters.

The statue was dedicated to the City of Baltimore by the Italian American Organization in October 1984, according to CBS Baltimore.

Lester Davis, a spokesman for Mayor Bernard C. “Jack” Young, told The Baltimore Sun on Saturday night that tearing down the statue is part of a “reexamination taking place nationally and globally around some of these monuments and statues that may represent different things to different people.”

Davis said tearing down the statue is part of a larger “national narrative.” Protests have erupted nationwide after the death of George Floyd in Minneapolis. Baltimore was also the scene of protests in 2015 when Freddie Gray died after suffering a traumatic spine injury while in police custody.