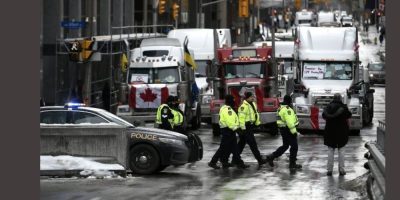 An inquiry into the federal government’s use of the Emergencies Act got a blaring introduction Friday to life in Ottawa during the “Freedom Convoy” protest as the deafening chorus of big-rig horns was played for the commission.

The first witness, a legally blind resident of downtown Ottawa, flinched as a recording of the horns resounded in the conference room for the benefit of the commissioner, lawyers, protest convoy organizers and members of the public.

The witness, Victoria De La Ronde, told the commission the protest that arrived in Ottawa in late January was an “assault on my hearing,” which she relied on to navigate the city independently.

“I found myself trapped,” said De La Ronde, who was left feeling hopeless and unable to leave her home.

She became emotional as she told the commission she eventually begged a friend to pick her up and help her leave the convoy zone. A few days later she and her friend both contracted COVID-19.

In the days after the protest ended, De La Ronde said, she could still hear phantom horns blaring in her head. Even now, the sound of a car horn ripples through her body, fraying her nerves, she said.

The commission is examining the evolution and goals of the protest, the effect of misinformation and disinformation on the convoy, and the efforts of police before and after the emergency declaration.

Zexi Li, a 22-year-old public servant who filed a court injunction to stop truckers from continually honking their horns during the protest, also shared her experience with the commission.

“It didn’t feel safe, my guard was up all the time,” Li said of walking the Ottawa streets during the protest.

Li launched a class-action lawsuit against convoy organizers Feb. 3, and an Ontario court granted her an injunction four days later to stop the horn honking.

On Feb. 14, the federal Liberals invoked the Emergencies Act for the first time as protesters opposed to COVID-19 public health measures and the Trudeau government occupied downtown Ottawa streets and blockaded border crossings.

The law temporarily granted police extraordinary powers and allowed banks to freeze accounts, which the government argues was critical to ending the protests.

Both Li and De La Ronde described feeling sleep-deprived by the constant noise rising from the street.

Evidence provided to the commission showed the noise levels outside their homes reached 100 decibels at times — about as loud as a lawn mower.

De La Ronde and Li are among 65 witnesses, including Prime Minister Justin Trudeau and convoy organizers, expected to testify before the commission.

Local business associations also shared the severe effect of the events on local shops and restaurants, many of which felt forced to close their doors.

In late January, when trucks began to roll into Ottawa, businesses were still shut under a provincial public health order. Some chose to open when the orders were lifted during the protest, but others remained closed, said Nathalie Carrier, executive director of the Vanier Business Improvement Area.

In some ways, the convoy proved even more devastating than COVID-19 public health measures, Carrier told the commission, since road closures and other disruptions prevented staff from coming to work and deliveries being made. At times, food delivery services would not come to the area.

At the time, police advised people to avoid the city core.

She recalled then-Ottawa police chief Peter Sloly commiserating with local business groups and saying he was scared as well, though the former chief’s counsel refuted the claim.

In times of crisis, “you turn to your leaders to have a plan and to be stable and I remember very specifically feeling … that maybe our leaders were a little shaken, and that’s scary,” Carrier said.

The implications of the convoy continue because the reputation of the city has been “tarnished,” said Kevin McHale, executive director of the Sparks Street Business Improvement Area, which represents a pedestrian shopping district one block south of the parliamentary precinct.

During the first day of commission hearings Thursday, a lawyer representing Ottawa police said the force had little time to prepare for the protests, and could not have predicted the resulting effects on the city.

David Migicovsky, legal counsel for the Ottawa Police Service, said there were well-established processes in place to deal with protesters, but they didn’t work during the “Freedom Convoy.”

He said none of the intelligence reports predicted the “level of community violence and social trauma that was inflicted on the city and its residents.”