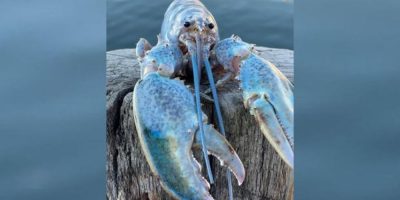 A lobsterman made the catch of a lifetime off the coast of Maine last weekend. Bill Coppersmith trapped a 1-in-100 million iridescent lobster, also known as a “cotton candy” lobster, CBS Boston reports.

Coppersmith has been fishing for 40 years but has never had a catch like the one he made in Casco Bay. He named it Haddie, after his granddaughter.

The colour change is the result of a rare genetic mutation that is not considered helpful to the lobster because they aren’t able to blend in with their environment.

There have been some other stunning catches in New England waters this year. A Boston seafood company caught a similarly rare albino lobster off the Maine coast in February. And in July, a fisherman in Gloucester, Massachusetts, pulled an unusual blue lobster out of the ocean.