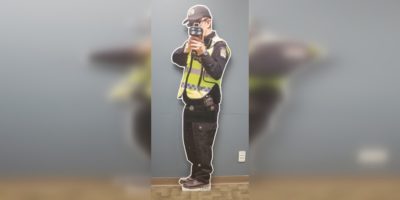 The City of Barrie is rolling out a new traffic calming measure: a cut out of a police officer.

The metal image depicting an officer holding a radar gun will be placed at the side of the road at select locations around the city over the course of the summer. It’s hoped the ersatz cop will encourage motorists to slow down. It cost the city about $900.