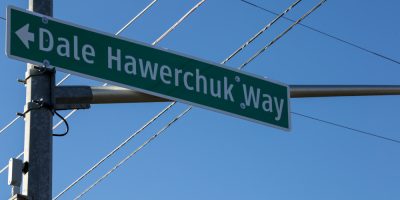 The Barrie Colts and The City of Barrie unveiled a new way they are honouring the legacy of Dale Hawerchuk: One of the streets leading into the Sadlon Arena will now be known as Dale Hawerchuk Way.

Dale Hawerchuk was a hall of fame player, 10-year head coach, and community advocate much loved by not only the Colts’ community but the wider Barrie community as a whole. Dale has supported many causes including minor sports programs, local SPCA requests, Easter Seals Ontario, Manitoba Kidney Foundation and the True North Youth Foundation.

Dale’s family has even carried on his philanthropic legacy by starting a new initiative bearing his name. Hawerchuk Strong sells merchandise such as hats, t-shirts, and other collectables in order to support many of the causes close to the heart of Dale and the Hawerchuk family.

On December 16, the Barrie Colts held a special pre-game ceremony honouring Dale with special guest speakers, video presentations, and an honourary banner that will forever hang in the home of the Barrie Colts.

“It’s with heavy hearts but fond memories that will be paying tribute to Dale Hawerchuk on December 16th. I not only had the pleasure of working with Dale in the sport of hockey but had the privilege of becoming one of his friends,” said Howie Campbell, President and Owner of the Barrie Colts.

The following day, the Barrie Colt’s owner was joined by Jeff Lehman and members of the Hawerchuk family to unveil the road that will be renamed Dale Hawerchuck Way, after Barrie City Council voted to approve the change. The street connects to Bayview Drive and leads into the Sadlon Arena.

“We will never forget him, he will live in our hearts forever,” said Crystal Hawerchuk at the sign unveiling. “He stood out in so many people’s lives.”