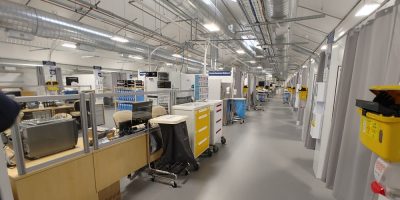 A study finds troubling news concerning the Delta variant and those unvaccinated against the coronavirus.

The Delta variant — which is more contagious than the original “Alpha variant” that spread globally — more than doubles the risk of hospitalization for the unvaccinated, according to a U.K. study published in The Lancet Infectious Diseases.

Meanwhile, in emergency rooms like one in Atlanta, ambulances are being turned away.

In seven states, more than 90% of ICU beds are full, according to federal data. Alabama has zero beds left in its ICUs, sparking a rush in vaccinations.

Nationwide, deaths from COVID are up 355% since early July. Louisiana hit a record high of 139 deaths in a single day on August 24, according to the Centers for Disease Control. In South Carolina, one funeral home director said they have never seen this many deaths due to COVID.

“It puts a stress not only on us, but the families we serve,” director Robert Borning told CBS Florence, South Carolina, affiliate WBTW-TV.

But there are stories of survival. One of Colorado’s first COVID patients, Jacob Larson, returned to serenade the doctors who saved him.

“The biggest ‘thank you’ anyone can give their health care provider is to go get their COVID vaccine,” said physician and hospitalist Dr. Aiman Rauf, who treated Larson.

Larson, who spent 20 days in the hospital, got his vaccine.