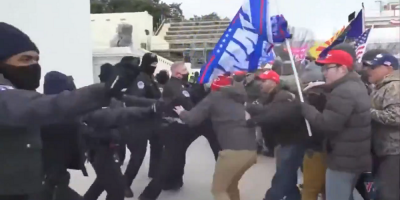 The certification of electoral votes has resumed at the United States Capital following an afternoon of uprising among pro-Trump supporters.

The certification of the Electoral College votes was halted as protestors stormed inside the building. More than a dozen Senate Republicans and over 100 GOP members of the House were expected to object to the tally, but fewer objections were raised following the violence that gripped the capital.

Video shot on the steps of the Capitol show rioters breaking through several barriers as officers in full riot gear moved to hold the crowd back. Pepper spray was deployed as physical altercations ensued between police and rioters. Several Capital campus buildings were evacuated, those in the Senate were told to shelter in place.

Pictures circulating on social media show protestors smashing glass at the doors to the Senate while inside several law enforcement officers stand nearby with guns drawn. Another picture is of a demonstrator in the office of House Speaker Nancy Pelosi.

There are reports a woman was shot inside the Capitol building and later succumbed to her injuries.

Rioters eventually pushed their way into the senate floor, and lawmakers remained in hiding for hours as hundreds of police worked to clear the building and bring the crisis under control. The electoral college votes to be certified were secured and moved to a secure location before rioters could reach them.

The President of the United States in a new video posted to Twitter called on demonstrators who stormed the Capitol building this afternoon to go home.

He repeated false claims that the election was “stolen.”

The video was posted moments after President-election Joe Biden urged Trump to address the nation and call for end to the violence at the Capitol.

Biden called the protestors extremists and the violence did not reflect the true America. “This is not dissent. It’s disorder. It’s chaos. It borders on sedition.” The White House says the President has asked for the National Guard.