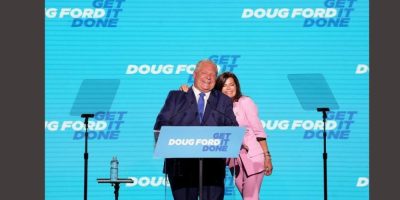 Hours after being handed a second majority government even larger than his first, Ontario Premier Doug Ford delivered a message of unity Friday to supporters new and old, as well as those who don’t support him at all.

The Progressive Conservatives won a commanding 83 out of the legislature’s 124 seats in Thursday’s election, but voter turnout hit an all-time low of 43 per cent. The Tories won about 41 per cent of those votes.

Ford said he will spend the next four years working for all Ontarians.

“Number one message I want to get out: It’s time for unity,” he said at a press conference.

“We want to make sure we unite this province. We want to move forward, because it’s not us versus people down the street. It’s Ontario versus every jurisdiction in the world.”

Ford will now have to name a new cabinet and reintroduce and pass a budget, but he said he wasn’t in a rush.

“We’re going to take our time, sit down with our team,” he said. “We have a big agenda to fulfill and keep our promises and we are going to make sure we keep every single promise.”

Ford said he would reintroduce an “almost identical” budget to the unpassed one that served as his party’s election platform, except for a few small tweaks. The Tories promised during the campaign to raise disability support payment rates, a pledge that was not in the budget from just a few weeks earlier.

Meanwhile, both the NDP and the Liberals will have to begin the task of searching for new leaders, as Thursday night also saw the respective resignations of Andrea Horwath and Steven Del Duca.

The NDP formed official Opposition again, with 31 seats, while the Liberals failed to secure official party status for the second consecutive election, with just eight seats.

Marit Stiles, who served as the NDP’s education critic during the previous government and was re-elected in her riding of Davenport, said she is open to the idea of a leadership bid.

But right now, she said, she needs to connect with caucus colleagues and community members to hear their vision of the party’s future and how New Democrats will position themselves to win in four years.

“We have a lot of work to do and we’re grieving some losses certainly right now,” she said.

“Of course, the results of the election are disappointing, particularly in terms of the conservative majority, but also the fact that 61 per cent of Ontarians were not inspired to vote at all. I think that is something that we as elected MPPs, and in the NDP, we have a big responsibility to understand and to chart a really strong path forward.”

Jennifer French, who won the riding of Oshawa for the NDP for a third time, said she hasn’t yet turned her mind to a leadership race, but that it will be about who will continue Horwath’s work rather than just replacing her.

“I think it’s about the next chapter and figuring out how we stay the course in terms of those progressive values and public services, investing in what people need to make their lives better and maybe a bit more hopeful,” she said.

The party said it will move quickly to choose an interim leader.

Peter Graefe, an associate political science professor at McMaster University, said whoever takes the helm of the Ontario NDP next will have to find a way to better appeal to Ontarians – but first they must gain recognition.

“You have to first get Ontarians to know you,” he said. “That’s going to take some time, I think.”

The Liberals, on the other hand, will be looking for a leader who can present a new image for the party that isn’t affiliated with past missteps. Del Duca, a former cabinet minister under past Liberal premier Kathleen Wynne, was unable to overcome his previous tenure during the campaign.

Chris Cochrane, an assistant professor of political science at the University of Toronto Scarborough, said the Liberals’ real defeat in this election is that they aren’t in a better position than where they were four years ago.

Their biggest challenge will be reintroducing themselves as a party that can form the government, he said.

Kevin den Heijer, a former Liberal staffer and public affairs adviser at Enterprise Canada, said the situation the party is in – with just one more seat than they had at dissolution – makes the leadership role an “unappetizing” one for many.

He said the party may be better off choosing an interim leader for the time being, then looking for a leader from outside the Ontario Liberal caucus.

“The party needs a refresh and it would be really great to get someone who comes from the outside,” den Heijer said, adding that the new leader should be someone who will “motivate voters” to vote against Ford, which he said both Del Duca and Horwath largely failed to do.

The Liberal party will also need to “re-evaluate its goals for the next election,” he said, focusing on strengthening grassroots operations as well as working towards getting into opposition.

None of the elected Liberals contacted by The Canadian Press immediately responded to requests for comment on Friday.

Wayne Petrozzi, a political science professor at Toronto Metropolitan University, said the Tory government will “have a pretty free hand” for the next year as the Liberals and New Democrats look to fill their leadership voids.

As politicians and parties carry on, Petrozzi said voters will likely move on with their lives and focus on other things.

“I think the dust will settle quick, then everyone’s going to go away,” he said.

This report by The Canadian Press was first published June 3, 2022.