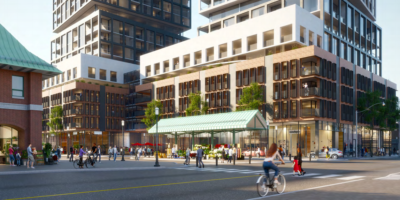 Waterfront Developments recently acquired the land upon which the Uptown Theatre sits, along with some adjacent property. It is proposing the whole block be a city centre complete with retail, office, and residential space, contained within two high rises. One would be 30 storeys, the other, 34.

This project would see the razing of the Uptown Theatre. First opened in 1937, it was known as the Imperial 8 until a rebranding in February of 2009. It has served as the home to the Barrie Film Festival for a number of years. Intentions to sell the theatre and surrounding property were announced in 2014.