Bow down and praise Wiarton Willie.

The rodent did not see his shadow when he emerged from his hole shortly after eight this morning, forecasting an early spring.

However, a slip up by South Bruce Peninsula Mayor Janice Jackson who said Willie predicted six more weeks of winter, but she got a second chance and corrected herself.

An early spring is the same prediction Willie made in 2019 and that turned out to be an epic bust, so better luck this time.

Stateside this morning, Punxsutawny Phil did not see his shadow.

Human weather experts say the ritual has a terrible record when it comes to predicting the weather.

In his book, “The Day Niagara Falls Ran Dry,” climatologist David Phillips cites a survey of 40 years of weather data from 13 Canadian cities, which concluded there was an equal number of cloudy and sunny days on Feb. 2 — and during that time, the groundhogs’ predictions were right only 37 per cent of the time. 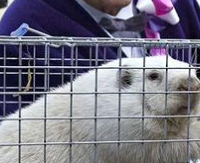