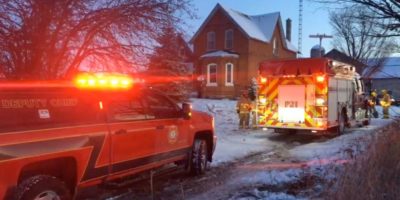 A reminder about proper space heater usage after Springwater Fire knocked down a blaze north of Barrie.

Fire crews got the call to a home on Old Second South near Pooles Road around 4:45 Tuesday morning, arriving to find a fire in the walls and attic of the home. A tanker shuttle was brought in and the fire was quickly brought under control. Springwater Fire says the cause was electrical in nature.

Update: Fire is under control, great job by crews at getting control of the fire quickly. Crews are breaking down water supply, Old Second should be open in approx 30 min. Investigator will be on scene shortly to determine cause. pic.twitter.com/NYl5GkDinZ

“Space heaters and other heavy appliances should be plugged directly into an outlet. Always avoid overloading a circuit,” warned Deputy Fire Chief Jeff French following the fire. “If additional outlets are required, have them installed by a licensed electrician.”

The home had working smoke detectors and all seven occupants were able to get out uninjured. Damage is estimated at $125,000.