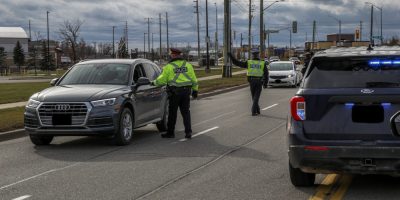 Led by the Ontario Association of Chiefs of Police and involving collaboration from Ontario police services across the region, the Festive RIDE program will run from November 18, 2021, to January 2, 2022. During the campaign, officers will be highly visible as they conduct RIDE initiatives 24 hours a day, seven days a week.

In 2021, OPP Central Region officers have already laid 1,862 charges for impaired driving and responded to 447 collisions involving impairment (of which 121 resulted in injury), a 22% increase from last year. Six people also lost their lives dues to collisions where impairment was a factor.

“These are real people behind these tragedies,” said John Van Dyke, Deputy Chief of SSP. “Not all impaired driving occurs on our roadways either, it also occurs on our trails and on the water. If you are convicted of impaired driving while operating an off-road vehicle, snowmobile, or boat, you face the same criminal sanctions as if you were operating a motor vehicle on the road.”

Police were consistently reminding the public that if you plan to drink or consume drugs, you must also plan to not drive, a sentiment echoed by Drew Sinclair, President of the Simcoe County Chapter of MADD Canada, “There are so many options to get home safely, and they are so incredibly easy to access. This is the time of year when we want to get together with friends and family and enjoy our time with them, not reminisce over people we’ve lost.”

For more information about the consequences and penalties of driving impaired, click here.