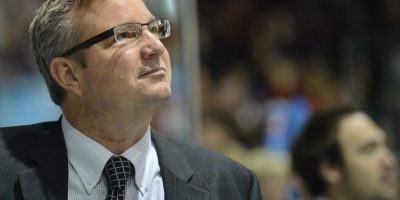 Marty Williamson might want to put on his lucky shirt or pair of socks before tonight’s first-ever OHL draft lottery.

While there won’t be any balls dropping to determine who will draft where, the acting Barrie Colts GM is hoping lady luck is smiling on the organization and they land a top pick, perhaps even first overall, for this year’s 2021 OHL Priority Selection on June 4-5.

The two previous times the Colts ended up with the first overall selection, they landed future first-round NHL picks in Aaron Ekblad and Ryan Suzuki.

“I haven’t been through one of these where you have no idea what you can get,” Williamson said. “You could win the draft and that would be pretty exciting for us.”

With this year’s OHL season cancelled due to the COVID-19 pandemic, the draft lottery will determine the order of this year’s 15-round draft.

With the Niagara IceDogs being stripped of their first-round selection due to league disciplinary issues, 19 teams will have an equal chance of securing the first overall pick, with the order to be determined by a computerized random number generator lottery process.

The lottery, which is being overseen by legal representative Robert Bayne of Filion Wakely Thorup Angeletti LLP, gets underway tonight at 7 p.m. and will be livestreamed on the OHL YouTube channel.

Winning tonight’s lottery also carries an extra prize with it. It will also determine the order of this year’s CHL Import Draft at the end of June.

“So, you get a top-five European pick, plus a top-five draft pick. That’s very exciting,” Williamson said. “You just don’t know.”

This year — also for the first time — teams will select in a serpentine arrangement, with the order of the first round being reversed in the second round and alternating each round after that.

As much as you can be disappointed if you hypothetically lose the draft and get pick No. 20, explains Williamson, you do get pick No. 21.

“You’ve got no control,” he said. “It’s been a crazy year with the pandemic and COVID, so this is kind of fitting that we should have a little excitement here because we haven’t had much all year.

“I don’t think you can be too disappointed with whatever happens to some extent, but it could be a real plus obviously if you get the No. 1 and then the No. 1 European pick.”

Williamson says this will also allow teams to get really focused on the draft.

“If you know you’re picking No. 10, there’s at least five or six kids you could take right off your board that are going to be gone by then,” he explained. “It allows you to nail down the interview process with some of these kids and if you know that you got the No. 1, No. 2 or that high, then you can really start fine tuning which guy is the best fit for your team.”

While lockdowns and severe restrictions severely cut down the opportunities for minor hockey teams and players to get on the ice and play — and for OHL scouts to get a closer look — Williamson believes assistant general manager Rob Stewart and his staff have a good idea on who the top prospects are for this year’s draft.

“I think Robbie and the guys have a good grip on the top guys, let’s say five rounds,” Williamson said. “We have a pretty good feel. Yeah, we haven’t seen them as much. We might have a guy in the 60s who deserves to be in the 70s or that, but that’s what you got to live with this year.

“As long as you’re not out of whack and you’ve seen enough of the top guys, and you feel comfortable that way.”

What’s going to be tougher are the later picks. Teams will have seen somebody they like in a limited amount and that’s where they could be going off the board.

“It’s just the hand we’ve been dealt,” Williamson said. “I think Robbie’s done a good job. We’re fortunate he was out early and watched as much as he could with our guys. We have a pretty good feel of what we need to do early in the draft.”

As for targeting a defenceman or forward, Williamson believes that depends on where your pick lands.

” If you happen to land a top three or four pick, then you’re probably leaning to the forward position,” he said. “If it’s a little bit later than that, then you can take best man available and you go to your team needs.”

Barrie drafted three forwards with their top picks last year and the thinking would suggest the team leans more towards grabbing a defenceman with its top pick.

Williamson said it simply comes down to tonight’s lottery and what happens early in the draft.

“You might have two or three defencemen you really like and one of them is gone and there’s a forward sitting there you like, so that leads to best person available,” he explained. “I do think forwards are going to dominate the top three or four picks. Where you’re picking will mean an awful lot.”

Williamson believes the league putting the cancelled season in the rear-view mirror and focusing on what’s ahead is much needed. It’s been a tough nine months for players who have been on a roller coaster-like ride of, “Am I playing or am I not playing. Where am I playing?”

“At least there’s a piece of mind now,” Williamson said. “You know what it is and let’s get on with the draft and have a heck of a season next year.”

And make sure you don’t forget to wear your lucky clothes tonight.