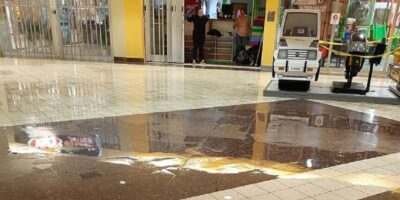 The lower level Bayfield Mall store was among those hit by floodwaters over the weekend. “The storm surge erupted up through the storm drain and there was a 12-inch geyser of water pouring up through the drain in the mall,” Vincent Booth, Sir-Games-A-Lot owner told Barrie 360 Monday afternoon,

The popular gaming destination’s manager estimates it lost a fair amount of games to the flood. “I might have lost about five grand in product,” he said, adding it could have been worse, if not for a prompt call from mall security, “My son-in-law and myself were in here and we were basically sweeping the water out of the store back into the mall, and I managed to get up all the expensive things off the floor. So because of the quick response from the Bayfield Mall, we managed to save most products,” Booth added his store appeared to be the only one impacted by the flooding, but since originally posting this story, Barrie 360 has been informed the nearby Service Ontario office was also impacted.

Booth adds he has some help from mall management, “The mall has been fantastic all through this crisis, I can’t say anything better about the Bayfield Mall,” he said, “They’ve been really good on the rent and everything like that. They had their stuff in here and fighting the flood the entire time, and they’re sending in a cleanup crew to clean my carpets and help in fixing everything.”

Booth believes the flooding came by way of a rusted-out backflow valve the new mall owners were not told about when they bought the property a few years ago. He said flooding was a regular concern before the valve was added about ten years ago.

The flooding comes just days after Sir-Games-A-Lot began doing business with the public again, albeit under certain restrictions. Booth said, despite the flooding, they are still open to customers by appointment and are available by phone at (705) 719-1291. Booth adds folks aren’t permitted within the mall right now, but curbside pickup is available.