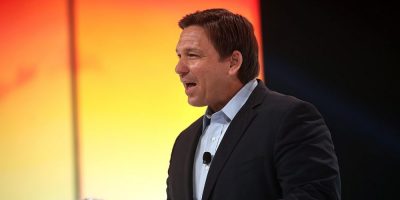 Florida Governor Ron DeSantis said Tuesday that his state will not shut down again despite a record-breaking influx of COVID-19 cases and hospitalizations, making the Sunshine State the nation’s new virus epicentre.

“We’re not shutting down,” DeSantis said Tuesday at a news conference. “These interventions have failed time and time again throughout this pandemic, not just in the United States but abroad. They have not stopped the spread. And particularly with Delta, which is even more transmissible, if it didn’t stop it before, it definitely ain’t going to stop it now.”

On Friday, Florida reported 21,683 new infections, the most COVID-19 cases in the state in a single day since the start of the pandemic, according to data released from the Centers for Disease Control and Prevention. On Sunday, Florida had 10,207 people hospitalized from COVID-19 complications, which broke a previous record from more than half a year before vaccines were widely available, according to data from the U.S. Department of Health and Human Services.

In July, Florida was one of four states that accounted for 40% of the country’s total infections, White House COVID-19 coordinator Jeff Zients said over the weekend. During that time, Florida recorded one out of every five of the nation’s new cases, he said.

DeSantis said Tuesday that “the media fixates on cases,” while perpetuating “hysteria” and “fear-mongering.” “Our hospitals are open for business,” he said.

But over the past month, several major hospitals have postponed elective surgeries in the state to accommodate growing COVID-related hospitalizations. “In the past three weeks, COVID patients in BayCare hospitals have increased more than three-fold,” BayCare Health System wrote in a statement announcing its elective procedure pause, which impacts multiple facilities in the state.

DeSantis attributed his state’s record-breaking uptick in cases and hospitalizations to the season, predicting that different regions in the country will soon undergo a similar surge and that things will get better in Florida.

Florida also leads the country with the highest per capita rate of children hospitalized with COVID-19. The state is averaging 35 daily pediatric hospitalizations, according to Jason Salemi, an associate professor of epidemiology at the University of South Florida.

DeSantis said Tuesday, however, that there isn’t any new data that shows that the Delta variant is more severe for children. “I think kids are very low risk, and I think the cost of keeping them out of school would be catastrophic,” he said.

Last week, the governor signed an executive order, barring school districts from forcing students to wear face masks when they return to class. Under the order, parents will be able to choose whether or not their children wear masks in schools, despite updated guidance last week from the CDC which said everyone inside K-12 schools should be required to wear a mask.

“We’re going to have the schools open. We need the kids getting the education,” DeSantis said, adding that his executive order is “empowering” for parents.

“I’m confident that things will go well,” he said about the upcoming school year.

When asked about the COVID policies of DeSantis and Texas Governor Greg Abbott, President Biden on Tuesday said, “I believe the results of their decisions are not good for their constituents and it’s clear to me and to most of the medical experts that the decisions being made, like not allowing mask mandates in school, are bad health policy.”

DeSantis attributed the uptick in hospitalizations for younger Florida residents to the tiered vaccination rollout earlier this year which prioritized vulnerable populations like the elderly.

“Would I rather have five cases amongst 20-year-olds or 500 cases among seniors?” DeSantis asked. “I would rather have the younger because of the effect that it has. And so I think protecting the vulnerable has been the right way to go.”

As of July 30, approximately 58.6% of adults in Florida have been fully vaccinated against COVID-19, according to the CDC’s weekly state synopsis. DeSantis said 25,000 fully vaccinated Florida residents have tested positive for COVID since May 1, but he urged eligible residents to get the vaccine because it offers “some form of protection.”