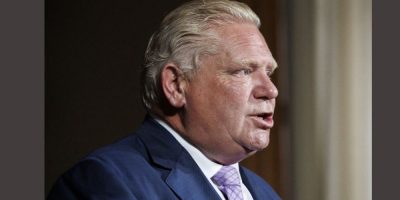 By Holly McKenzie-Sutter in Stratford, Ont.

Ontario Premier Doug Ford said he’s doing everything in his power to add more health-care workers to the system, but indicated that won’t include repealing wage restraint legislation or increasing a retention bonus for nurses.

Ford hasn’t held a news conference in Ontario since late June and took questions for the first time Wednesday on the hospital crisis that’s seen several emergency rooms close for hours or even days at a time due to staff shortages.

The premier largely stuck to a message that most high-urgency patients are getting timely care and surgeries are being completed at close to pre-pandemic rates. The government is trying to add more staff to the system, he said, including a target of hiring 5,000 more nurses and trying to speed up accreditation for internationally trained nurses.

“I appreciate the front-line health care workers, they work their backs off, day in and day out,” Ford said after an unrelated announcement in southwestern Ontario.

The NDP and the head of the Ontario Nurses’ Association accused Ford of “downplaying” the crisis in hospitals.

The University Health Network in downtown Toronto issued an alert this week saying its cardio-vascular, cardiac and medical-surgical intensive care units have either reached their total bed capacity or do not have enough staff to keep all beds open safely.

Several hospitals said last week that they were reducing service in certain areas over the long weekend due to staff shortages.

Nursing groups, hospital executives, other health-care professionals and advocates have said that burnout after being on the COVID-19 front lines for more than two years and not being properly compensated have caused people to leave the profession in droves.

Many nurses point to Bill 124 as a major source of concern, saying that the legislation that capped wage increases for public sector workers to one per cent a year for three years has devalued their work.

Ford noted that the provisions expire and won’t apply to their next contract negotiations, but didn’t say that he would repeal it, adding that the government has offered nurses a $5,000 bonus.

“I also want to mention that they got the largest increase in the entire country,” he said when asked if he would scrap Bill 124.

When asked if he would commit to paying them more, Ford said no one thinks the world of nurses and other health-care workers more than he does.

Ford also said jurisdictions across the country are facing the same problems when it comes to strained health-care systems and called on the federal government to increase health transfers to the provinces and territories.

Cathryn Hoy, president of the Ontario Nurses’ Association, said nurses need actual wage increases, not one-time payments. Even though the provisions of Bill 124 will expire, she said if it is repealed, nurses could renegotiate their wages in their current contracts.

She said it is good the government is looking to add more internationally trained nurses to the system, but Ford needs to repeal Bill 124 in order to retain enough existing nurses to help them.

“He can bring in all the internationally trained nurses he wants, but if you don’t have nurses there to support them, we’re going to have a huge issue,” she said.

“This morning, I was horrified to hear Ford downplaying the crisis in Ontario’s hospitals,” she said in a statement.

This report by The Canadian Press was first published Aug. 3, 2022.