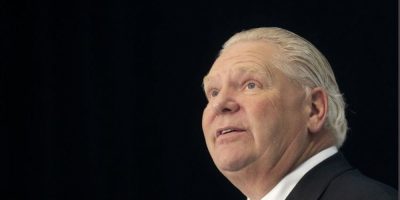 Calls for Ontario Premier Doug Ford to testify at the Emergencies Act inquiry in Ottawa grew Tuesday when he did not show up to question period at the provincial legislature, one day after being summoned by the federal commission.

Ford and former solicitor general Sylvia Jones, who is now the health minister, were summoned Monday to appear at the public inquiry, which is examining the federal government’s use of the Emergencies Act to end the so-called Freedom Convoy protests in Ottawa and Windsor, Ont., last winter.

The province has said it will be seeking a judicial review to set aside the summons for Ford and Jones “under the grounds the summons are inconsistent with the members’ parliamentary privilege.”

Last week, Ford told reporters he had not been asked to appear at the inquiry, but lawyers for the Public Order Emergency Commission say the premier and Jones refused repeated requests to appear voluntarily.

New Democrat MPP Joel Harden, who represents an Ottawa riding the protests descended upon last winter, said Tuesday the premier must testify at the inquiry.

“I’m not persuaded with the premier saying, ‘It’s not my problem.’ It is your problem, you’re the premier of the province,” Harden said.

“We don’t want any kind of convoy movement coming to any one of our cities in Canada again, but we have to actually get the best evidence – they have to be in Ottawa, they have to testify. Running and hiding and not facing the music is not appropriate.”

Green Party Leader Mike Schreiner said Ford owes it to Ontarians to appear before the inquiry and he should follow the lead of federal politicians who are waiving confidentiality to testify at the proceeding.

“I think the premier has an obligation to the people of Ontario to show leadership, to be clear and honest about the decisions his government took, and the last time I checked, Ottawa and Windsor are located in Ontario,” Schreiner said.

Government House Leader Paul Calandra said the premier was too busy to show up for question period on Tuesday.

“The premier is out today making an announcement and giving a speech,” Calandra told reporters after question period, referring to Ford previewing housing legislation at a Toronto Board of Trade event hours before it was introduced.

Jones was also not at question period, the first one since the legislature resumed following a six-week break.

Documents filed with the inquiry into the federal government’s use of the Emergencies Act show that when City of Ottawa officials asked the province for resources to help end the protest, the province directed them to deal with the Ontario Provincial Police and that Jones saw it as a law enforcement issue.

Calandra reiterated, both in question period on Tuesday and to reporters afterwards, that the province believes the inquiry is a policing matter and not a political one.

“This is a federal inquiry into the federal government’s use of the Emergency Act,” he said, adding that two senior provincial bureaucrats will testify.

Top officials with the OPP have testified, and the province has provided hundreds of pages of documents to the inquiry.

It’s unclear if the province has filed the judicial review application. The Attorney General’s office did not respond to questions about the application.

Ian Stedman, a public policy professor with York University, said parliamentary privilege is an old privilege that provides immunity from parliamentarians from being scrutinized by court.

Court, by way of a judicial review, will determine if a parliamentary privilege exists within a set of facts and context specific to this case, Stedman said.

“If the court recognizes that there’s a privilege within the context that you’re asserting, it’s not allowed to go and interrogate the extent or depth of breadth of that privilege,” he said.

He said the province will have to make the case that publicly disclosing details of how it dealt with the unfolding crisis would get in the way of the proper functioning of parliament.

There is another type parliamentary privilege the province could argue in court: collective privilege.

“It’s the collective privilege of the house to basically protect its members from being compelled to testify before court or anything as long as the house is sitting,” Stedman said.

“I don’t think anyone really knows what to expect from the assertion of privilege here,” Stedman said.

But Steven Chaplin, an adjunct professor with the University of Ottawa who worked for more than a decade as the senior legal counsel for the House of Commons, said he thinks invoking parliamentary privilege will work for Ford.

“Parliamentary privilege would apply,” Chaplin said. “They have that privilege and the courts should basically quash the summons.”

In 2005, the Supreme Court of Canada affirmed that privilege, which applies to courts and to inquiries, Chaplin said.

This report by The Canadian Press was first published Oct. 25, 2022.