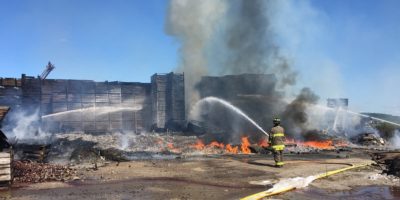 A stack of pallets went up in smoke, at a Schomberg-area carrot farm.

Fire crews from King, Central York, New Tecumseth and Bradford were called in to deal with the fire on River Rd. near Hillsview Rd. around 11:00 Thursday morning; massive columns of smoke could be seen from a distance.

The fire was brought under control around noon, with no injuries reported. A cause of the fire has yet to be reported.