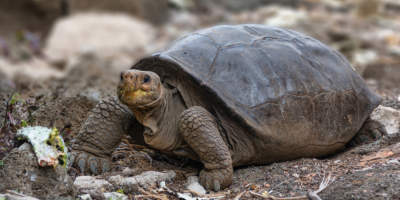 Scientists have found a giant tortoise on the Galápagos Islands from a species thought to have gone extinct more than 100 years ago.

Genetic tests match the single female tortoise to the species Chelonoidis phantasticus, Ecuador’s Ministry of the Environment and Water confirmed Tuesday. A team of geneticists from Yale University compared samples from the female to the remains of a male to make the connection.

Scientists hadn’t spotted one of the tortoises since 1906. Populations of giant tortoises have been devastated by both hunting and volcanic eruptions.

“It was believed to have gone extinct more than 100 years ago! We have reconfirmed its existence,” Environment Minister Gustavo Manrique tweeted. “Hope is intact.”

Researchers from the California Academy of Sciences found the tortoise during a 2019 expedition to Fernandina Island to study flora and fauna. They believe there may be more tortoises from the species still in the wild and are planning an expedition to search for them later this year.

Danny Rueda, director of the Galapagos National Park, said that the discovery “undoubtedly renews our hope of recovery of this species.”

The female tortoise, who is believed to be over 100 years old, is currently in a breeding center on Santa Cruz Island. Scientists hope to find her a mate to revive the species.

“One of the greatest mysteries of the Galápagos has been the giant tortoise of Fernandina Island. The rediscovery of this lost species may have happened just in time to save it,” said Dr. James Gibbs, vice president of Science and Conservation for the Galapagos Conservancy. “Now we urgently need to complete the search to find other turtles.”