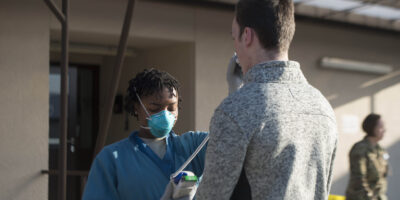 About a month after Germany began gradually easing coronavirus lockdown restrictions, experts from the country’s federal health agency are warning that a vital metric used to measure the spread of the virus could be on the rise again.

The reproduction or “R” rate — the rate at which a virus is believed to be spreading — appears to have accelerated for two consecutive days, the Robert Koch Institute said. Over the weekend, Germany’s R rate went back over 1, deemed a critical tipping point by many epidemiologists and government leaders.

The figure indicates how many other individuals a single COVID-19-positive person is expected to infect. An R rate greater than 1 indicates an outbreak likely to grow quickly. Anything below 1 suggests an outbreak under control or being brought under control. Britain, where the government decided not to significantly ease lockdown restrictions over the weekend, currently has an estimated R rate between .5 and .9.

According to the RKI, the R rate in Germany was estimated at 1.1 on Saturday and 1.13 on Sunday.

The health agency has repeatedly stressed that in order for the epidemic to subside, the R rate must be kept below 1. Chancellor Angela Merkel stressed that figure was an important factor as she and other officials consider how and when to further loosen restrictions on businesses and individuals.

At the beginning of May, the number was between .7 and .8 for several days. On Wednesday last week, as Merkel declared success in the first phase of Germany’s battle with the virus and significantly eased lockdown measures, the R rate stood at .65.

Since then, it has risen steadily. The RKI has stressed that the R rate is always subject to a degree of uncertainty.

“Due to statistical fluctuations, which are amplified by the overall lower number of cases, it is therefore still not possible to assess whether the decreasing trend in the number of incident cases observed over the past few weeks will continue or whether case numbers will again increase,” the institute said in a statement.

Jonas Schmidt-Chanasit, a professor of virology at the University of Hamburg, told CBS News that, in general, the R number must be observed over a longer period than just a couple days to get a sense of the epidemic’s real trajectory.

“Only because we can see a slight increase over the last few days, it doesn’t mean that that’s the trend. Inevitably the number will fluctuate due to the easing of restrictions, but that doesn’t necessarily mean an exponential rise in infections,” he said.

It’s also important to note that the R number on any given day does not reflect current circumstances. For methodological reasons, the figure represents infections that occurred some time ago.

On this basis, scientists likely won’t link the higher numbers seen over the weekend to the latest, and most significant relaxations of the lockdown, which were announced by the federal and state governments last Wednesday. Measures began to ease weeks before that, however, and the experts will be watching very closely for any continuation of the trend over the R rate of 1, and worrying even more if it goes up higher.