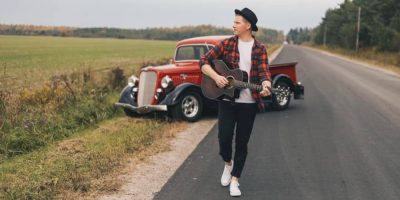 We have a lot of talented musicians in Simcoe County. One of these talented artists is starting to emerge as a promising artist in the country music scene.

Graham Scott Fleming, from Elmvale, has been climbing the charts with his single “Better Man”.

“Better Man” is a powerful post-breakup anthem that anyone can relate to. It’s filled with emotional lyrics and hard electric guitars. The song comes from a vulnerable place for Graham.

According to one publication, “‘Better Man’ showcases Graham’s vocal range and ability to tell his stories in a way that connects with listeners at the core.”

2022 has been an exciting year for Graham.

At the beginning of the year, he was named as a top artist to watch in 2022″ by Front Porch Music. His song “Better Man” was named a “Trending Track” for Real Country and Rogers named him “One To Watch” in a national promotion.

To say Graham has been able to connect with an audience, is an understatement.

How Graham Scott Fleming Got His Start

But music wasn’t initially on his radar…

He didn’t even know he could sing until his last year in High School. His school’s music teacher overheard him singing in the hallways with his friends. They used to do karaoke together for fun, but his teacher encouraged him to join the school’s Blues band.

Performing in that band gave him the music bug.

Since then, Graham Scott Fleming has appeared in the Broadway production of Miss Saigon, and was the lead in the Mirvish Theatre production of Kinky Boots, working alongside Cindy Lauper.

In 2021, Graham released his debut country single “Deja Vu”, which made splashes in the indie country music circles. His follow-up single “High Life” did the same. So when he released “Better Man” the music industry was ready for him.

PODCAST: Graham Scott Fleming Talks About His New Record Label, His Experience With Kinky Boots And A New Single (and more local news)

Performing At The Legendary El Mocambo In Toronto

Graham Scott Fleming will be performing at the legendary El Mocambo on Thursday March 10, 2022, opening for up and coming artist Kendra Kay.

The El Mocambo is an iconic venue.

The venue has played an important cultural role in the development of music and entertainment in Toronto since 1948. It is best known for the 1977 surprise show by The Rolling Stones.

RELATED: Go backstage with The Rolling Stones at UNZIPPED in Kitchener …

Get your tickets for this show here, and support some local talent!