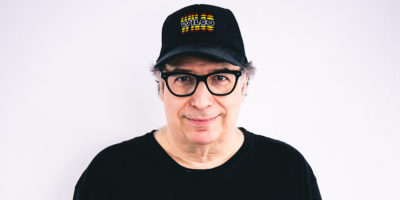 From his close friend, Josie Dye:

Today our family at Indie 88 has lost Bookie, our colleague, a mentor, and to me, a best friend.

Everyone knows Bookie as a crusader of the independent, winning the Unsung Hero award for his spirit and drive to make Indie happen. He has started careers for major bands such as Billy Talent, but he was also known as one of Canada’s top interviewers, forming relationships with artists such as Dave Grohl and Bono.

Bookie was the last true personality on air. He wasn’t hired for his charm, his looks, or his voice. He didn’t work his brand, or promote himself. He exuded knowledge, truth, opinions that mattered that had foundations in research and love for music. Bookie was never defined by a genre or a stereotype and cool was never in his vocabulary. He never lost vision of the music that unites us and even the word “Indie” was too pigeon-holed for what he brought to the music scene.

Bookie loved The Young and the Restless and Gilmore Girls and would comment the same way about each episode as he did the newest, hottest band. When I first met Bookie at 102.1 The Edge I was intimidated by his legacy…and right away he accepted me, when others questioned my “edginess.” We worked together side by side for 20 years. We acted like two teenage girls scheming to get more attention from our significant others. We shared a dozen calls a day about absolutely nothing. We FaceTimed each other in public bathrooms, hiding from our industry, usually laughing at how socially awkward we both were.

There was part of Bookie I wish we could all learn from. His convictions were strong, and his moral compass was tight. There was no grey area with Bookie; he knew what was right and what was wrong. It was challenging at times to be his friend knowing that he would always call you out when your compass slipped. Recently, when grieving the loss of another friend, Bookie told me I should try saying his name every day. I can’t think of a day that I won’t miss coming off air to be greeted by him (in his wonderfully unique way).

I used to think people like Bookie only existed in novels. Now I know, novels were written because of characters like Bookie. Our country has lost an icon and a beautiful man.