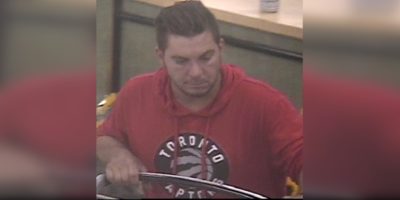 Police say a grocery bandit got as far as the door with his ill-gotten gains.

A man was spotted by store staff filling up a cart before making an attempt to leave, around 8:00 Tuesday evening, at the Zehrs store at Yonge and Big Bay Point in Barrie. Loss prevention staff stopped the man at the exit and tried to get him back into the store to hold him for police. The man allegedly dashed off instead, leaving the cart of items behind.

He is described as:

If he looks familiar to you, contact Constable N. Petersen of the Barrie Police Service at 705-725-7025 ext. 2764 or npetersen@barriepolice.ca. Any information can be provided anonymously to Crime Stoppers at 1-800-222-TIPS or leave an anonymous tip online at www.p3tips.com.