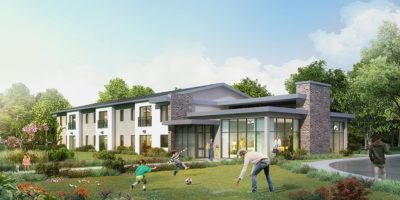 The next 18 months will see the property behind the Salvation Army Barrie Citadel on Lillian Crescent transformed into a new modern housing development that’s greatly needed in the city.

An official groundbreaking was held Tuesday on the new $3 million dollar short-term supported family housing project for families in housing crisis. Redwood Park Communities is building the two-storey building on land donated by the Salvation Army. The modern building will have a community hub and 12 fully furnished, two-bedroom apartments.

Redwood CEO Tim Kent wants to think of those 12 units as more than that. “It’s really about 800 families that will use those units over the next 20 years.” Kent says Redwood will take care of the building – which was funded by a $3 Million capital fundraising campaign. “Each time we do a housing project, I’m overwhelmed by the support of the people and businesses of Barrie, and this project has been no exception.”

Groundbreaking at Salvation Army and Redwood Park Communities $3 million housing project site on Lillian crescent in #Barrie. The 12 unit build will help nearly 80p families transition during times of crisis over the next 20 years pic.twitter.com/w2aJYfrL2V

“Some families that get evicted or lose their housing and have nowhere to go require supports to work through barriers and issues to stay permanently housed. Our case managers work with the individual families to make sure they don’t end up back in the same place in a few months,” said Captain Stephanie Watkinson of the Salvation Army Bayside Mission.

The Salvation Army Bayside Mission will take care of all case management and programming.