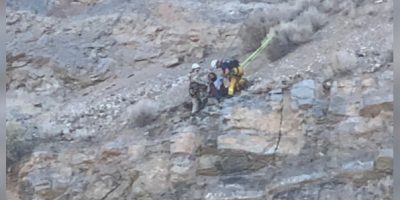 A Utah hiker who fell more than 100 feet to a cliff ledge over the weekend was stuck there for hours before being rescued, authorities said. Salt Lake City Fire Capt. Tony Stowe said the 29-year-old man was hiking near an industrial area in the city west of Ensign Peak on Sunday around 4 a.m. when he fell down the mountain, stopping just before the cliff edge, the Salt Lake Tribune reported.

Stowe said the man lost his phone during the fall and couldn’t call for help, leaving himself stranded for more than five hours. He said a group of homeless people living in the area noticed the man, who was flashing his flashlight and waving his arms.

Here you can see crews lowering the man down the cliff side. pic.twitter.com/obxq3FqZB1

Rescuers were able to lower a bucket to the spot so the man could safely be lowered, reports CBS Salt Lake City affiliate KUTV.

Stowe said the man was taken to the hospital with what appeared to be a broken pelvis and leg.