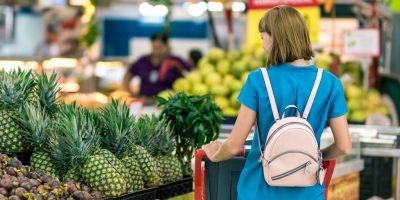 The cost of nearly everything at the grocery store continued to climb higher to push the annual inflation rate up in April.

Statistics Canada said Wednesday that its consumer price index for April rose 6.8 per cent compared with a year ago, up from a gain of 6.7 per cent for March.

The rate was the highest since January 1991 when the annual rate was 6.9 per cent.

“The key takeaway from April’s CPI release is that inflation is spreading much more broadly, and at clear risk of getting firmly entrenched,” Bank of Montreal chief economist Douglas Porter wrote in a brief report.

“Barring a deep dive in oil prices in coming weeks and months, we expect that the worst is yet to come on the headline readings, and that inflation north of six per cent will still be with us by the end of this year.”

Overall food costs rose 8.8 per cent compared with a year ago, while Canadians paid 9.7 per cent more for food at stores in April, the largest increase since September 1981. The cost of food in restaurants was up 6.6 per cent.

Russia’s invasion of Ukraine in late February has put upward price pressure on food products that use wheat, Statistics Canada said, while poor weather in growing regions has also impacted prices for food.

The agency also said higher prices for things such as fertilizer and natural gas continued to increase the cost for farmers, who have passed along some of these costs.

Also contributing to the overall rise in the cost of living was a 7.4 per cent increase in shelter costs as the cost to heat a home climbed higher. Natural gas rose 22.2 per cent and fuel oil and other fuels gained 64.4 per cent.

Compared with a year ago, consumers paid 36.3 per cent more for gasoline in April, however the increase was smaller than the year-over-year gain of 39.8 per cent in March.

Excluding gasoline, the annual rate for April was 5.8 per cent compared with a year-over-year gain of 5.5 per cent for March.

The average of the three measures of core inflation that are closely watched by the Bank of Canada rose to 4.23 per cent in April compared with 3.93 per cent in March.

The central bank raised its key interest rate target by half a percentage point to one per cent last month and warned more interest rate hikes are coming as it works to try to bring inflation back to its target of two per cent.

In its monetary policy report last month, the Bank of Canada said it expected inflation to average almost six per cent in the first half of the year, however it has since said it will likely be revising its forecast.

The Bank of Canada’s next rate announcement is scheduled for June 1.

This report by The Canadian Press was first published May 18, 2022.