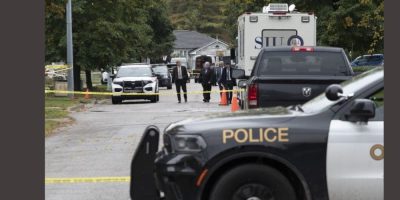 A 23-year-old man who died in a shooting in Innisfil that also killed two South Simcoe police officers served briefly in the military but was never deployed.

The Department of National Defence confirmed that the man was a Canadian Armed Forces member from May to December 2020.

The Defence Department says the 23-year-old was a private with no deployment history, and he did not complete basic training.

Ontario police’s watchdog, which is investigating, said the two police officers were responding to a call from a family member about a disturbance at a home on Tuesday in the area of 25 Side Road and 9th Line.

There was an exchange of gunfire inside the residence, the Special Investigations Unit said, and the officers later died in hospital. The 23-year-old man died on the scene.

The SIU confirmed to Barrie 360 on Thursday that based on preliminary information, the two officers did not draw their guns when they were shot, while a third officer who was in the house exchanged gunfire with the man.

An autopsy for the young man is scheduled for Friday. The SIU has said the gun he used was an SKS semi-automatic rifle.

Residents who live in the area expressed shock at what happened. Some said an elderly couple who had an adult grandson lived in the house where the shooting took place.

Heartfelt thank you to the ⁦@OPP_News⁩ Golden Helmets for stopping by our divisions to show your support. Just one of the many ways our policing partners are helping us through these difficult days. pic.twitter.com/MZhnRGKrLB

Northrup, a six-year member of the South Simcoe Police Service, worked with the community mobilization and engagement unit, and also served as a member of the mental health crisis outreach team and the emergency response unit. He is survived by his partner and parents, police said.

Russell, a father of two, was a 33-year veteran of the force. He was a trained crisis negotiator and was assigned to uniform patrol, the police service said.