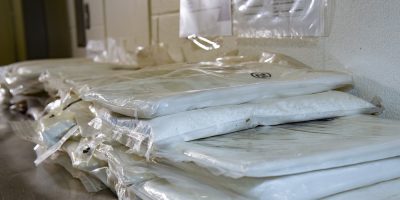 An Innisfil man is among those facing charges following a 15-month probe into a cross-border drug smuggling operation.

The OPP provided details on Thursday of its Project Southam, a joint investigation that began in March 2020 when police became aware of the importing of cocaine into Canada.

Investigators were able to identify two main groups working together to smuggle drugs into Canada. One group was smuggling coke in from Columbia, concealed in textiles. The other imported its cocaine from the Caribbean.

The investigation into these activities culminated in the execution of 44 search warrants at 25 locations on July 7. Among those locations was an address in Innisfil. The OPP say a 37-year-old Innisfil man has been arrested and faces charges in connection to trafficking and organized crime.

He is among the 22 people facing a combined 139 charges as a result of Project Southam. The investigation also resulted in the seizure of:

Investigators peg the street value of the drug seized at over $10 million.