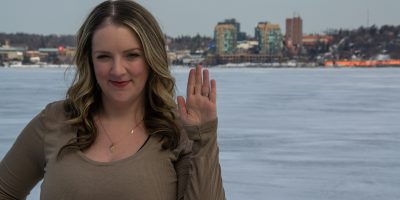 A call to action has been tagged to this year’s International Women’s Day asking you to stand up and challenge gender inequality.

It’s about choosing to do something. Raising your hand and making the decision to speak up when something isn’t fair. It’s a call to take that action every single day so that our mothers, sisters, and daughters can be afforded every opportunity as our fathers, sons, and brothers.

Organizers of International Women’s Day have asked people all around the world to raise a hand high Monday in a sign of commitment to choose to challenge and call out gender bias and inequality, adding that “a challenged world is an alert world.”

We didn’t have to go very far to find a vocal female leader in our community who’s among those choosing to challenge gender bias. Hinda Koza-Culp is Barrie 360’s Digital Director.

Koza-Culp has always worked in traditionally male-dominated fields, starting her career 15 years ago, as a sideline reporter in the Ontario Hockey League.

“Charlotte Whitton once said ‘whatever women do they must do twice as well as men to be thought half as good’ and I think that’s particularly true in journalism, in media in general,” Koza-Culp said.

“I prepared twice as hard as my male colleagues and faced far more criticism – not just from viewers but from within the company. In my career I have been paid less than a man doing the same job, I’ve also been passed over for a promotion that was instead given to a man with less experience. When I advocated for myself, I was labeled as difficult, or ungrateful.”

She feels women within the media industry are subconsciously set up to view each other as competition. “It took a long time for me to break out of that mindset myself.”

For Koza-Culp, International Women’s Day is important, but she hopes the message of social, political, and economic equality for women is one that can be amplified every day.

“We need to choose to challenge, especially in the wake of a global pandemic. The economic fallout of COVID-19 has disproportionately affected women – particularly women of colour,” Koza-Culp said. “And as an aside – can we also abolish the word bossy? I was called bossy more than any other word when I was growing up. But no one ever calls little boys bossy. People call little girls bossy because they are afraid of what might happen if girls grow up valuing their leadership abilities rather than viewing it as a negative.”

The Ontario Chamber Network’s recent report, The She-Covery Project: Confronting the Gendered Economic Impacts of COVID-19 in Ontario, addresses that very topic Koza-Culp is referring to.

The report looks into the economic impacts of the pandemic on women in Ontario and its author says the findings show the pandemic was “especially challenging” for intersectional groups, including racialized women, single mothers, low-income women, newcomers, and women with disabilities.

The Orillia District Chamber of Commerce & Ontario Chamber of
Commerce (OCC) is kicking off International Women’s Day with a call to action to public policymakers to take leadership on the pandemic’s impact on women with targeted support and recovery planning in the upcoming provincial and federal budgets.

International Women’s Day is a global day celebrating the social, economic, cultural, and political achievements of women. The day also marks a call to action for accelerating gender parity. We are sharing stories of local women on our social media feeds today, so tag us @Barrie360 and use the hashtag #ChooseToChallenge.

If you choose the challenge, strike the #ChooseToChallenge pose with your hand high.