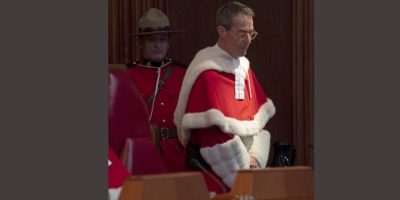 By Erika Ibrahim in Ottawa

Canada’s highest court has ruled that the law barring the use of automatism⁠, or a state of extreme intoxication, as a defence for some crimes is unconstitutional and called on Parliament to consider new legislation.

The Supreme Court of Canada ruled on three cases Friday that examined whether people who commit certain violent crimes can use the defence of automatism⁠ — a state of extreme intoxication to the point where they lose control of themselves.

Justice Nicholas Kasirer, who wrote the unanimous decision, said the section of the Criminal Code that bars the use of this defence for certain acts is unconstitutional.

Kasirer said the use of the Criminal Code section violates the Charter because a person’s decision to become intoxicated does not mean they intended to commit a violent offence.

The section also violates the Charter because an accused could be convicted without the prosecution having to prove the person was willing or meant to commit the act.

The court also said that Parliament may want to enact a new law to hold extremely intoxicated people accountable for violent crimes, to protect vulnerable victims, particularly women and children.

The federal government enacted the existing law in 1995 amid a backlash over a court ruling that recognized drunkenness could be raised as a defence against a sexual assault charge.

Justice Minister David Lametti said in a statement Friday that the government is carefully reviewing the top court’s decision to assess its effect on victims as well as the criminal law.

Lametti noted that the decision does not apply to the “vast majority” of cases involving someone who commits a crime while intoxicated.

One of the cases considered by the court was that of a Calgary man who consumed alcohol and magic mushrooms and then violently attacked a woman while in a state of extreme intoxication.

The court restored the acquittal of Matthew Brown, who was convicted for breaking into a professor’s house and assaulting her with a broom handle while he was naked and high on magic mushrooms.

Kasirer said Brown was not merely drunk or high, but “was in a psychotic state and had no willed control over his actions.”

The court’s other decision dealt with two Ontario cases, for Thomas Chan and David Sullivan.

The men had either killed or injured close relatives. Both were high on drugs — one had eaten magic mushrooms, while the other had tried to kill himself with an overdose of a prescription stop-smoking medication.

Applying the decision in Brown’s case, the court acquitted Sullivan because he proved he was intoxicated “to the point of automatism,” noting the trial judge found he was acting involuntarily.

The top court ordered a new trial for Chan because he was entitled to raise the defence of automatism but no finding of fact had been made in the original trial.

Women’s groups had previously expressed concerns about the defences raised by the men, arguing that they could erode protections for women from sexual assault and other gender-based violence.

Kat Owens, project director at the Women’s Legal Education and Action Fund, said it was important that the court on Friday clarified the difference between drunkenness and extreme intoxication.

In Brown’s ruling, the court said that drunkenness is never a defence for certain crimes, including manslaughter, assault and sexual assault, a clarification Owens said was valuable “given the many ways in which we see the criminal justice system fails survivors of sexual violence.”

On whether the government chooses to pursue legislation, Owens said that too often the criminal justice system fails and re-traumatizes survivors of sexual and gender-based violence, and focus should be put on the way existing laws are applied and how actors in the justice system interact with survivors.

Owens also said governments could explore responses to sexual violence outside the criminal justice system, such as a restorative justice approach.