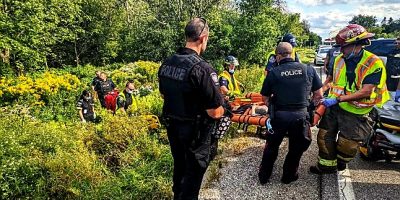 A multi-vehicle collision on Sideroad 10 south of Highway 89 in Innisfil, where one of the drivers fled on foot.

South Simcoe Police were called to the crash around 3 p.m. on Saturday.

They say a car northbound on Sideroad 10 struck a cargo van in front of it, then crossed into southbound traffic and hit a second car head-on. A southbound SUV then hit the back of that car and went into the ditch. Witnesses told police the female driver of the northbound car fled into the woods. Police got a description of the woman, who was the lone occupant of the vehicle.

The K9 unit began to track in a wooded area and located the woman concealed in very thick foliage. She was unresponsive and had to be carried out of the woods by police, firefighters and paramedics. The woman was transported to a local hospital. Two people from the second car were also taken to the hospital. All of the injuries were considered non-life-threatening.