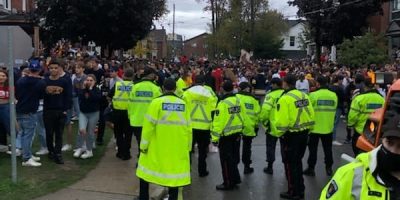 The University District of Kingston was taken over by more than 8,000 people who attended a homecoming party on Saturday.

@Kingstonpolice @cityofkingston Kingston Police continue to deal with intoxicated students that moved off the streets and into the area of Victoria Park. pic.twitter.com/55H0aMefew

A Kingston police officer was taken to hospital on Saturday after being struck by a projectile. The injuries are said to be minor.

Police and Queen’s University officials were aware of the possibility of an unsanctioned party and students had been urged to avoid mass gatherings. Queens held a virtual homecoming as part of a Saturday afternoon football game against Carleton, though the crowd in attendance at the game was sparse.

Queen’s University took to Twitter to condemn not only reports of some people throwing projectiles at police but also the displaying of misogynistic signs in the University District.

#queensu condemns the misogynistic signs in the University District and reports of some individuals throwing projectiles at police which led to an officer being injured. These actions will be actively pursued under our Student Code of Conduct.

Banners were seen hanging outside some students’ houses with messages like “Western guys wish they were Pfizer so they can get inside her” and “Lockdown your daughters not Kingston.”

Where are the landlords of these @ygk student rentals? https://t.co/qPOmz1DCq6

Police declared the gathering an “aggravated nuisance party” using a bylaw that allowed them to fine attendees up to $2,000 each.