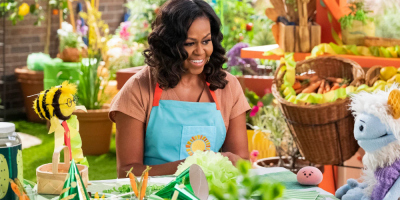 Michelle Obama has announced a new Netflix series called Waffles + Mochi where she hopes to encourage children and families to get into the kitchen, cook delicious food, and build healthier eating habits.

During her time in the white house, Michelle Obama was a champion of leading a healthy, active lifestyle and spent years fighting childhood obesity through programs like Let’s Move. It seems like a change in real estate isn’t going to stop her from contributing to this health-conscious cause.

I’m beyond thrilled to share that on March 16, I’ll be launching a new show on @Netflix called Waffles + Mochi! I'm excited for families and children everywhere to join us on our adventures as we discover, cook, and eat delicious food from all over the world. pic.twitter.com/dedUWMp9SY

Waffles + Mochi will be a family-friendly show that follows two puppets with a dream of learning how to cook with the help of the former First Lady and her magical flying shopping cart.

Waffles + Mochi is just Another in a long line-up of projects coming from a partnership between Higher Ground Productions, the Obama’s production company, and Netflix thanks to a multi-year deal signed in 2018. American Factory, an award-winning documentary, is also available on Netflix right now and there are even more projects slated to release in the coming months.

Check out Waffle + Mochi when it hits Netflix on March 16th.