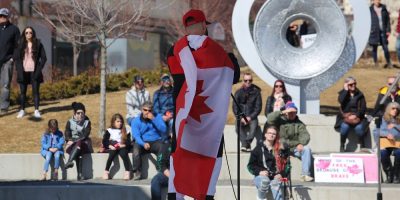 For the second time, the court case of an injunction against a protest organizer has been put off until another day.

The City of Barrie sought an injunction against organizer Tyler Nicholson on May 13, following weeks of Saturday afternoon rallies in downtown Barrie. The move to seek an injunction came following the issuing of an emergency order to fence off the site of weekly protests at Meridian Place.

On Thursday, the matter was adjourned a second time after first being put off on May 17, with the understanding that no protest be organized for this upcoming weekend. “The hearing of the interim and interlocutory motion to restrain Mr. Nicholson which was scheduled for Thursday, May 27, 2021 has been adjourned by the parties as Mr. Nicholson has agreed not to organize, host, or participate in a public event or gathering in contravention of Regulation 82/20 of the Reopening Ontario (A Flexible Response to COVID-19) Act, on property owned by the City of Barrie until the disposition of the Application. The City and Mr. Nicholson will work with the Court to obtain a date to have the matter heard in its entirety,” reads a statement provided by a City Hall spokesperson.

The legal representative for Mr. Nicholson, Sam Presvelos of Presvelos Law LLP, told Barrie 360 via email he likes his client’s odds. “We feel strongly about our litigation position. We look forward to vigorously protecting Mr. Nicholson’s rights under the Charter. As this is an active matter before the courts, it would not be appropriate to comment further.”

Barrie 360 has previously requested an interview with Mr. Nicholson, an offer that has yet to be accepted.