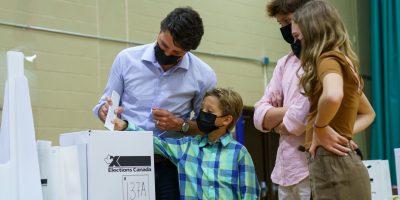 The costly pandemic election ended the same way it began with the Liberals forming another minority government.

While it’s still early, the composition of the House of Commons may not be what Liberal Leader Justin Trudeau had hoped for when he called the snap election.

The Liberals had held 157 seats coming into the 44th general election and currently have one more seat (158).

The Conservatives (119) and Bloc Québécois (34), while the NDP is at 25 seats. The Green Party won two seats. The Peoples Party of Canada failed to win a seat.

As he addressed supporters early Tuesday morning after holding onto his role as prime minister, Justin Trudeau said Canada elected a government in Ottawa “that will fight for Canadians.”

“This election has confirmed that our democracy and our institutions remain strong,” said Trudeau. “The moments we face demand real, important change.”

“I heard you … you don’t want us talking about elections anymore,” Trudeau added.

That last remark came on the heels of Conservative Leader Erin O’Toole’s speech.

That speech, which sounded more like an election campaign than conceding an election, repeatedly warned that the Liberals would call another election in 18 months’ time.

O’Toole also criticized Trudeau for calling this election, saying the campaign deepened political divisions among Canadians during the 4th wave of the Covid-19 pandemic.

NDP Leader Jagmeet Singh spoke about fighting for affordable housing while working to tax the uber-rich.

“We will fight for all Canadians, so together we will all rise,” said Singh.

The People’s Party of Canada (PPC) appears to have more than tripled its support since 2019, with over 5 per cent of the popular vote.

The Greens have 2 seats and 2.2 per cent of the popular vote.

The most expensive election in Canada’s history, an election that nobody seemed to want, ends with the Trudeau Liberals yet again relying on the NDP to pass legislation.