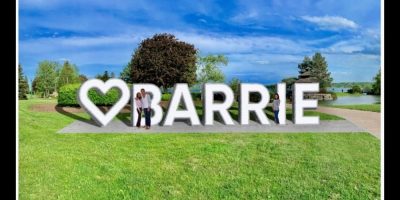 Do you feel the love for Barrie?

The city councillor announced on Monday that the Love Barrie campaign has kicked off, and organizers want the public to share what they love about Barrie.

“Intended to unite residents of Barrie with hometown pride, the project will also support tourism to the downtown area and the independent businesses there,” according to a media release.

“Landmark signs like this one generate tourism. We’ve seen this in Ottawa, Toronto, and even Blue Mountain. Bringing people down to Heritage Park and then connecting them to the businesses in our downtown will help support their economic recovery,” mentioned McCann in the media release. “On top of that, we will have something the residents can be proud of. How can you not love Barrie?!”

At the city council meeting on June 14, council said the sign must be no more than eight feet tall.

There is $15,000 in the city budget for maintenance costs.

Any cash raised above the $200,000 where no donation receipts have been issued will be donated to turtle awareness and beaver programs in Barrie.

McCann was unable to provide to Barrie 360 how much he had raised to date, but “the fundraising machine is very healthy,” he noted.

Any money that he doesn’t raise, McCann said he is putting it in personally with his own company.

The Love Barrie sign is scheduled to be installed at Heritage Park by July 1, 2022.