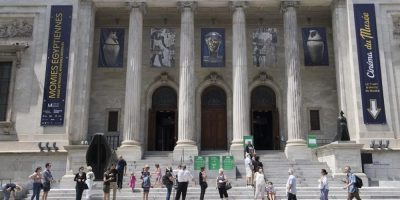 Fifty years after what has been described as the biggest art heist in Canadian history, the thieves’ identity remains a mystery, and nobody is keen to talk about it.

From the Montreal police to the art museum that was burgled, from Canadian Heritage to the Quebec Culture Department, mum’s the word on the Skylight Caper.

It was in the early morning hours of Sept. 4, 1972 that three men rappelled from a skylight down a nylon rope into the second floor of the Montreal Museum of Fine Arts. They had selected the one skylight for which the alarm hadn’t been set, and once inside, the armed trio quickly overpowered the museum’s few overnight guards.

Blindfolded, gagged and bound in a first−floor lecture hall, the guards could only provide the most basic of descriptions—the two men they actually saw were of average height and build, wore ski masks and had long hair. Two of the thieves spoke French and one spoke English. A fair chunk of the city’s male population could fit the description.

It is not altogether surprising the case faded quickly from memory, as the 1972 Labour Day weekend was particularly eventful. On Friday, Sept. 1, three men who were refused entry to Montreal’s Wagon Wheel, a country and western bar, set fire to a rear staircase. The blaze ultimately consumed the entire building, killing 37 people.

The next day Canada lost the opening game of the 1972 Summit Series to the Soviet Union at the Montreal Forum.

And by the time news of the Skylight Caper began hitting national newswires, international attention had been drawn to the unfolding Munich Olympics hostage crisis, soon to degenerate into one of the most appalling acts of terrorism the world had seen.

To this day, the Montreal theft – which the journal Canadian Art in 2019 called the largest in the country’s history — remains remarkably obscure.

For about half an hour the trio went about selecting the paintings, small objects and pieces of jewelry they intended to steal. Evidence from the scene suggested to investigators that the thieves attempted to rig a pulley system to haul themselves, and the precious art and artifacts they had stolen, back through the skylight. Later reports on the theft indicated the thieves abandoned their initial pulley scheme and opted to use the museum’s panel van instead.

One of the thieves inadvertently tripped the alarm on a side door leading out to the street, in the process eliminating the suspicion it had been an inside job.

Investigators later determined that the thieves panicked, grabbed what they could carry −− 18 paintings and 39 small objects −− and took off on foot. Among the stolen items were paintings by Delacroix, Jan Brueghel the Elder, Millet, Rubens and Rembrandt.

What had been left behind was even more surprising: masterpieces by Goya, El Greco, Picasso, a Renoir and another Rembrandt.

Police later concluded that what connected the stolen pieces was their size −− all were small enough to be easily stacked together.

At the time, the museum estimated it had lost $2 million in stolen property −− nearly $14 million in today’s dollars. Later estimates indicated the Rembrandt alone may have been worth that much.

Only two of the stolen items have ever been recovered −− a pendant and a painting attributed to Jan Brueghel the Elder −− both during ultimately failed ransom efforts.

As the 50th anniversary approached, the Montreal police department was asked for comment about the unsolved mystery. Spokesperson Anik de Repentigny said the case is still considered open and offered no further comment.

But long−time art crime investigator and retired Montreal police detective Alain Lacoursière — a man whose talent for solving art crimes earned him the nickname the Columbo of art — doesn’t believe Montreal police are actively investigating the theft because no one is familiar with the file.

Lacoursière has also previously told both the Journal of Art Crime and Canadian Art that he believes the investigation was flawed from the beginning, alleging files were mishandled and investigators gave up too soon.

Though the museum’s media relations department put together a collection of files about the case, they were reluctant to discuss it in any depth. The theft is for all intents and purposes a cold case, the paintings and objects are now the stolen property of the insurer and the affair dealt an embarrassing blow to the museum’s prestige and collection.

“Any artwork’s theft is a tragedy, as it deprives society of the benefits of art and knowledge,” Maude Béland, media relations officer for the museum, said in an email. “Of course, we would love to have them back! Unfortunately, we do not have any new information.”

When contacted by The Canadian Press for comment on the anniversary of the theft, spokespeople for representatives at three levels of government declined all comment.

The Skylight Caper is unique among high−profile art thefts, as the paintings have both increased and decreased in value. After the Brueghel was returned unscathed in a show of good faith during ransom negotiations, it was re−assessed by a prominent art historian and determined unlikely to have been painted by the great master.

Subsequent review of the museum’s files on the stolen paintings, as reported in the Journal of Art Crime in 2011, revealed that doubts had been cast on the authenticity and/or attribution of about seven paintings, in some cases dating to six years before the heist. Adding insult to injury, a Rubens purchased by the museum with the insurance payout was also later determined to be misattributed.

What seemed like the biggest break in the case came about 30 years after the theft at a small art gallery in Montreal’s east end. Lacoursière struck up a conversation with a man he would subsequently nickname Smith who seemed to know everything about the case, including details that weren’t commonly known to the public.

The man was an avid art collector, independently wealthy and had been an art student in Montreal in 1972. “Smith” indicated he might have been part of a group of art students Montreal police suspected in the weeks after the theft.

Lacoursière at one point showed up at the man’s home and asked him — perhaps hoping to throw him off — where in his backyard they should start digging. “Smith” just laughed it off.

“He was certainly well versed in the details of the theft,” Lacoursière said in an email exchange, “but I think this was either from newspapers or from friends.”

The retired detective spent a good part of his career investigating the case but still has no clear idea of what happened to the paintings aside from a hope that they still exist somewhere.